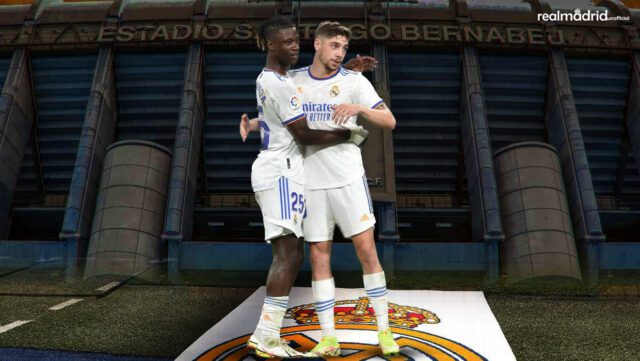 Over the years, Real Madrid has boasted arguably the best trio in European football with the possession of Luka Modric, Toni Kroos and Casemiro. Each of the players is unique in his own way and coming together as a friendly trio even off the pitch has proved pivotal for the club in diverse ways.

Casemiro is, however, the only player without a direct replacement but anyone who has stepped in for him has played a key role as well.

Two names have mainly been touted as replacements for the Brazil international. They are, Federico Valverde and Eduardo Camavinga.

The pair have been good squad additions to Carlo Ancelotti’s team and they could prove more vital in the latter part of the season with fatigue already setting in.

The Los Blancos have been involved in a total of 41 games so far in the 2021/22 season. During that time, the total number of minutes available is 3,690 for all 41 games across all competitions.

Out of the 41 games, Casemiro has played 37 of those games despite being named in the matchday squad on 38 occasions. Valverde and Camavinga have played a total of 32 and 27 games respectively.

With regards to minutes played, Casemiro has had 3,083 under his belt with Valverde enjoying 1,770 minutes while Camavinga has played 1,012 minutes.

Casemiro has missed four games this season (vs. Athletic Bilbao, Mallorca, Granada and Paris Saint-Germa) and two of them have come as a result of yellow card suspensions. However, in that time, none of the games he has missed has ended in a defeat for the club.

Camavinga may be the one to have enjoyed the fewer minutes among the three players, but he is the one with the most goals.

The France international joined Madrid this season and despite his impressive debut, playing time has been hard to find. But whenever he has played, Camavinga has shown his quality.

Valverde has been in and out of the team due to injuries but the Uruguayan’s quality cannot to undermined.

He was an integral part of Zinedine Zidane’s team and while he may not have a permanent place in Ancelotti’s starting line-up, he has been used as a weapon in the big games.

Against PSG in the Champions League, Valverde played alongside Modric and Kroos and was one of Madrid’s brightest spots from the game as the club beat the Ligue 1 side 3-2 on aggregate to secure passage into the next round.

Casemiro may be the core face in that defensive midfield position but the depth Valverde and Camavinga provide when given the chance can also not be ignored.

Ancelotti has a lot of options in his midfield and despite the great form of Modric and the tidiness of Kroos, Valverde and Camavinga are his best bets in the latter part of the campaign if Madrid is to walk away with another trophy.