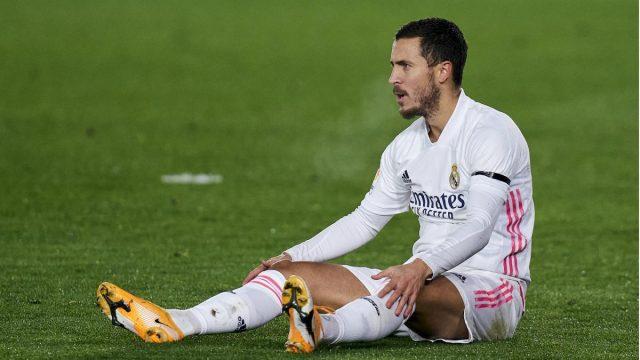 Real Madrid were dealt another blow on Wednesday during the league game against Deportivo Alaves after Eden Hazard walked off after just 22 minutes of action.

Prior to that, the winger had suffered eight injuries since making the move to the Santiago Bernabeu two summers ago.

Eden Hazard has had more injuries (9) than goals and assists (7) since leaving Chelsea for Real Madrid. pic.twitter.com/LkAEuiHVGB

He’s move to Madrid has been more of a setback than a progress thus far and he would be questioning himself anytime he has to go off injured.

Despite playing just 31% of the league games since the start of the 2019/20 season, Hazard has been the most fouled player in the competition and it tells you why he has had so many injuries in just a short time.

If his latest injury is anything to go by, the Belgium international could be saying an earlier goodbye to football in 2020 than he thought of.

A report on the club’s official website read: ‘Following tests carried out today on our player, Eden Hazard, by Real Madrid Medical Services, he has been diagnosed with an injury in the rectus femoris muscle of his right leg. His recovery will continue to be assessed.’

There are reports the 30-year-old is likely miss Madrid’s next five games with today’s inclusive – Shakhter Donetsk, Sevilla, Borussia Mönchengladbach and Atlético Madrid and the game against Eibar could come too early for him.

In the best case scenario, the former Chelsea man could only be fit for the league game against Granada on December 23, and that would mean he has missed yet another derby game since moving to Spain.

A player of Hazard’s quality shouldn’t be suffering on the sidelines but just sometimes that is the unpredictable nature of the sport we choose to follow.

Wishing the winger the best of luck in the period of recovery. Come back stronger, Eden!