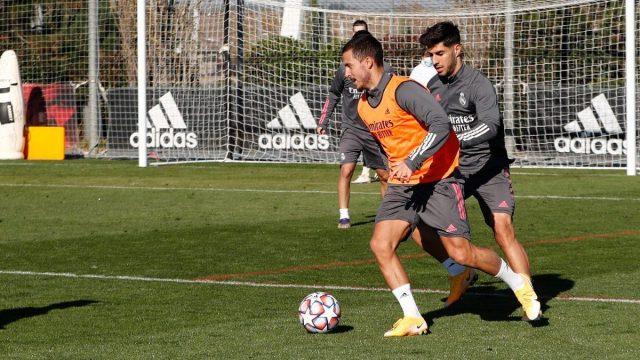 Inter Milan will be hoping to end their winless streak in this season’s UEFA Champions League when they host Real Madrid at the San Siro on Wednesday.

Inter have taken just two points from their opening three games in the group, drawing with Borussia Mönchengladbach and Shakhtar Donetsk before losing to Madrid away from home.

Zinedine Zidane’s side on the other hand have four points having defeated the Italian outfit in their last game in the competition before the international break.

Both teams have all to play for in this encounter and at some point, the game could be settled by individual brilliance.

Here, we at Real Madrid Unofficial take a look at some of the key battles on the pitch that could pronounce the outcome of the game in midweek.

Amongst the two keepers, Samor Handanovic is the only one to have kept at least one clean sheet – which he secured in the 0-0 draw with Shakhtar in the second game. Their form may not be of the very best at the moment but both keepers have what it takes to determine the result of a game.
The Inter skipper may not have age on his side but he has got the experience to turn up in such big games.

Romelu Lukaku’s absence during the reverse fixture looked worrying for Antonio Conte but with the forward back with the team, the manager will be keen to get him to replicate his performance over the weekend.

Mariano Diaz over the weekend was handed a start due to the absence of both Karim Benzema and Luka Jovic and that is likely to be the case once again on Wednesday. The forward opened the scoring for the Los Blancos and has the backing of the coach to even do bigger things.

They may not end up on the same flank but one of Ivan Perisic or Eden Hazard could be key in this encounter. Both players possess some individual brilliance that could open up defences. The drive, footworks and strength is all they need to cause havoc in a game. And both teams will be wishing the best player turns up that day at the San Siro.

Faced each other on a couple of occasions – domestically an also in Europe and have seen a fierce battle on the pitch. They will face each other once again and Vida will be hoping for fruition this time around. Casemiro was the winner the last time out, playing a key role in his side’s victory over the Nerazzurris.