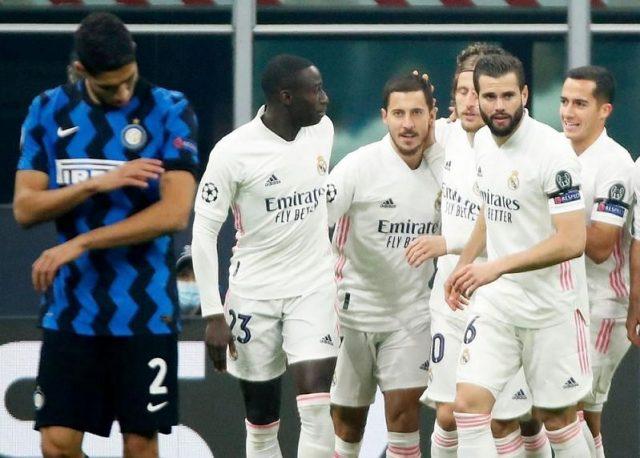 Real Madrid resumed UEFA Champions League action on Wednesday night with a 2-0 win over Inter Milan at the San Siro.

Goals from Eden Hazard and Rodrygo Goes were enough to send the away side into second position and inflict more misery on Antonio Conte’s side.

Madrid started the game the better side creating all chances in the first half and were lucky to go in front after just seven minutes, with Eden Hazard converting from the spot.

Lucas Vazquez and Mariano Diaz had the opportunities to double Madrid’s lead shortly after the goal but their efforts could only cause a scare for the home side.

Inter grew into the game after 25 minutes and looked to cause problems for Madrid at the back but the defenders were on hand to deal with all threats.

After an appeal for a penalty was declined, Arturo Vidal was involved in an argument with referee Anthony Taylor who showed a double yellow card to the midfielder sending him off.

Madrid went into the break with just the early strike from the Belgium international while also having a man advantage.

Inter came back from the break as a much improved side threatening from all angles but their heat could only last for just ten with Madrid taking over possession.

Zinedine Zidane introduced Casemiro and Rodrygo Goes in the 59th minute and the 19-year-old scored with his first touch of the game shortly after coming on.

Thibaut Courtois came up with a crucial save in the latter part of the game to ensure he secured his first clean sheet after last doing so in the win over Levante back in October.

The results mean that the Los Blancos have now taken up the second position with just a point behind first-placed Borussia Mönchengladbach with two games to go.