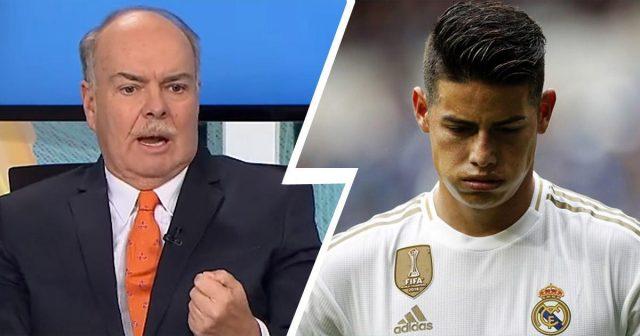 James Rodriguez is doing himself no favors at Real Madrid at the moment and his name has since been in the news.

One man who is not having any sympathy on the Colombian is fellow compatriot Ivan Mejia Alvarez, a Colombian television presenter, who believes the former Monaco man is responsible for all his troubles.

“He didn’t want to be a footballer or to succeed.

“Unfortunately he thought he was the main figure, but at Real Madrid that was Cristiano Ronaldo.

“He stopped being a footballer and began to be a figurine.

“He was never a professional because he thought he owned the team.

James has not been a popular figure under the management of Zinedine Zidane as he has been involved in very little of the games played so far this season.

However, Mejia believes the Frenchman is not to be blamed for the troubles and stress the Colombian is going through at the Santiago Bernabeu.

“It’s because of him, don’t blame the coaches,” Mejia added.

“It’s not Zidane’s fault, the club told him that he has to have the player.”

The 28-year-old is looking likely to bring an end to his stay at Madrid having enjoyed success in the past, with Atletico Madrid, Manchester United and a host of other European clubs ready to battle for his signature.