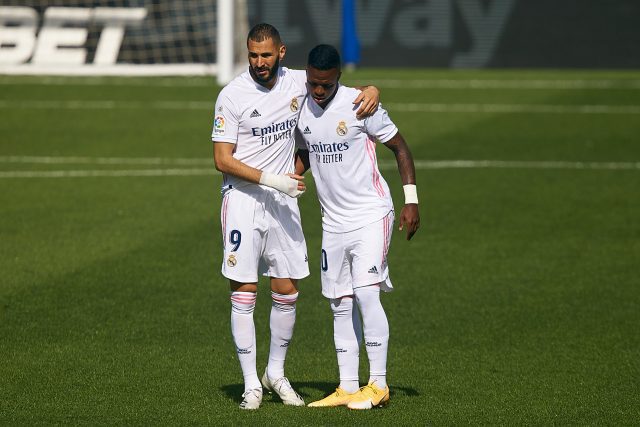 After weeks of carrying Real Madrid both domestically and in the European competitions, it was clear Karim Benzema needed someone to carry some of the burdens off his shoulders.

If midweek’s performance against Liverpool in the UEFA Champions League was anything to go by, then the Frenchman could soon be carrying fewer tasks – the helper? Vinicius Junior!

The 20-yer-old scored a brace against the current Premier League champions and many feel he may be about to kick start his Real Madrid career.

His recent performances have seen him attract high praise from strike partner Benzema, who despite praising him revealed he sometimes shouts at Vinicius because he believes in his talent.

“Vini is a very young player, but I believe in him because he has everything to succeed here,” Benzema explained in an interview with LaLiga. “This is why I talk a lot with him on the pitch, sometimes it’s a little loud, but that is because of him. He can give more, because when he wants to be, he is a phenomenon.”

Madrid are up against Barcelona in their next league game and a win against their fiercest rivals could put them on a path for yet another Spanish league title after being crowned champions last season. Benzema believes El Clasico has earned its right title to be adjudged the ultimate game in the sport.

“The Clasico for me is the best game in the world,” Benzema added. “Not only for me, but for everyone, because there are two teams that have a lot of history. It’s always a very important match.”

While he has been mentioned as the star performer for the Los Blancos since the departure of Cristiano Ronaldo, the Madrid No.9 didn’t fall for the chance to praise himself ahead of what could be a potential league decider on Saturday.

“I don’t know if this has been my best season,” Benzema confirmed. “Every year I start from scratch and I want to improve on the previous one.

“Now I’m on a scoring streak and if I can continue, with work to help my team win points and games, I’m going to do it. The important thing is to win.”