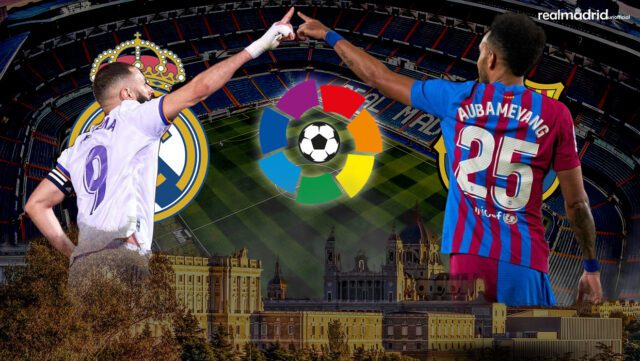 Whatever changes this fixture has seen over the last couple of years, it never loses its title as one of the biggest games in world football.

It’s Real Madrid versus Barcelona over the weekend at the Santiago Bernabeu, with the former looking to run away with the Spanish league title.

In the last few years, Lionel Messi, Cristiano Ronaldo, Neymar, Angel Di Maria and some of the world’s biggest players have all had a feel of what it takes to play in the El Clasico.

Another man who could be involved in his first Clasico on Sunday is Gabon’s Pierre-Emerick Aubameyang.

The forward made the move to Barcelona in the winter summer after scraping his deal with Premier League side, Arsenal.

Aubameyang has had a good start to life in Spain and the once upon a time Madrid fan plays against his boyhood club at the Bernabeu, hoping to make the Los Blancos regret for not pursuing him.

However, he comes up against a player who has been consistent for his club since the departure of a certain hero – Karim Benzema.

In this write-up, we take a look at the impact both Benzema and Aubameyang could have for their respective clubs when they meet in what could be a defining moment for the Blaugranas.

Benzema has been the focal point of Madrid’s team in the last 2-3 years following the departure of Ronaldo. The Frenchman has been involved in every little way to help the club get back to its feet. It’s no surprise what Benzema has achieved so far this season in terms of his goalscoring. The forward has scored 22 league goals this season, eight more than the second-highest top-scorer in the top-flight. The France international manages a goal every 94 minutes of league action an improvement on his record from last season.

Aubameyang, despite being too far apart in terms of goals scored compared to the Madrid star, has a better scoring ratio than Benzema. The Gabonese has found the back of the net five times in his six league games so far, amassing a scoring frequency of 75 minutes. He currently has seven goals in his last seven games across all competition and will be looking to add to that on Sunday.

One advantage Benzema has over many forwards in the world currently is the fact that he has the flair and is better at linking up plays.

Benzema is the kind of player who can drift players out of position to create spaces for his teammates. We have seen that from the Frenchman on several occasions this season, forcing young Vinicius Junior to penetrate through defences and cause havoc.

Even when Benzema is not scoring, he has a way of contributing directly to his team’s goals on a number of occasions. He has provided 11 assists in the 25 league games he has played and if there is anything that has made this possible, it is his ability to adapt to the style of his teammates and relate well with them on the pitch.

Aubameyang, on the other hand, is the kind of striker who wants to take his chances in front of goal. Deadly on one-v-one situations, the former Arsenal man is unique in his own way as well.

However, Aubameyang is more adjusted to staying in and around the penalty box, where he does most of his damages.

Both Karim Benzema and Pierre-Aubameyang will likely be in action on Sunday and for us, it will be a perfect opportunity to see the quality one possesses over the other.