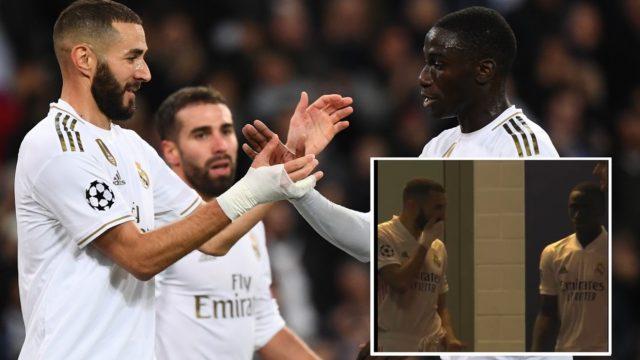 The match, which took place on Tuesday at the Borussia Park was Madrid’s second group game in the 2020/21 UEFA Champions League.

Benzema was on target for the away side however a footage has popped up which appeared to show that the Frenchman was critical of teammate Vinicius Junior.

He is reported to have urged Ferland Mendy at half-time to avoid distributing passes to the Brazil international.

Vinicius was wasteful in possession for the majority of the first 45 minutes, with his decision making in the final third of the pitch also receiving heavy criticism.

“Play it to me,” Benzema apparently told Mendy. “On my mum’s life, he [Vinicius] is playing against us.”

Karim Benzema tells Ferland Mendy not to pass to Vinicius Jr at half-time during last night’s game between Gladbach & Real Madrid: “Brother don’t play to him. On my mother’s life. He is playing against us.” pic.twitter.com/zmpciQRgAV

To make things even worse, Benzema failed to pass the ball to Vinicius in the second half of the encounter before the winger was replaced in the 70th minute.

The video footage has been the massive talk on social media receiving a bit of mixed reaction from supporters as well as football fanatics.

However, for someone who came under much pressure himself a few seasons ago, it was inappropriate to speak very ill of the youngster if the footage is anything to go by.

With Benzema’s role in the team, such comments are disheartening and could cause more damage than we see. He went through a tough time in the famous white shirt for sometime and saw the Bernabeu faithful’s turning their back on him however he could count on the services of Cristiano Ronaldo at that time.

First, the Portugal international called for the fans to be patient with the Frenchman and not boo him after he missed a sitter during the game against Real Sociedad in 2018.

That wasn’t the end, Ronaldo also asked the fans to applaud Benzema after the latter assisted him in a win over Alaves weeks later that same season.

As a way of boosting his morale, the former Madrid winger also sacrificed his hat-trick and gave a penalty to Benzema in that same game.

Having said all these, it very important for the Madrid No.9 to use these situations as a reference to lift the confidence of Vinicius rather than condemning him.

For a young player, the pressure will continue to mount on his performances but there is a lot his teammates can do to ensure he gets back to his best.