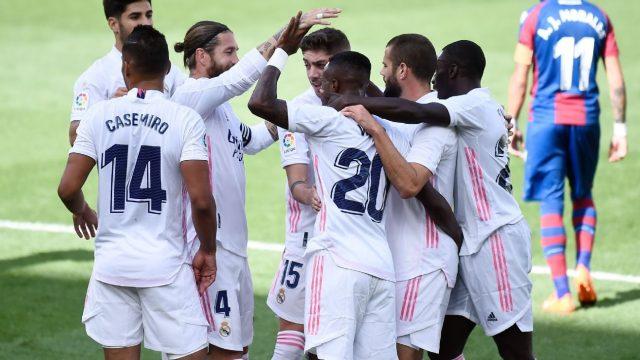 Real Madrid recorded a third consecutive win over the weekend in the 2020/21 La Liga campaign after beating Levante on Sunday.

The defending champions needed goals from Vinicius Junior and Karim Benzema to make sure that last season’s result at the Cuidad de Valencia did not repeat itself.

Los Blancos are now unbeaten in 15 league games, which dates back to June when the 2019/20 season restarted following the three points in lockdown as a result of the coronavirus pandemic.

The away side beat Levante by two goals to nil to ensure that Zinedine Zidane’s side moved to the top of the La Liga table with a game in hand.

Vinicius opened the scoring on the 15th minute mark after his stunning strike in the 18-yard box following a failed clearance at the back by the home team found the back of the net.

Things could have been worse for Levante in the opening 45 minutes of the game but for poor finishing in front of goal by Madrid, both teams went into the break with just one goal between them.

The second half was more of an end to end action with both teams throwing attacks at each other and Madrid’s Thibaut Courtois was on top of his game once again. The Belgium international managed his third clean sheet of the season and won yet another Man of the Match award with his vital saves.

However, Madrid had to wait until the 95th minute to add the second of the game with Benzema opening his account for this term.

Paco Lopez’s side have now dropped down to the 18th position following the loss and would need to up their game if they are to avoid finishing in the bottom half of the table.

Zidane’s side play newly promoted side Cadiz after the international break on October 18.