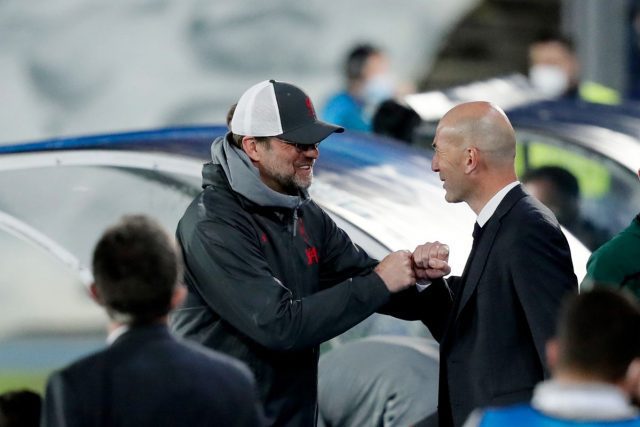 Real Madrid are will be looking to cement their position in the semi-finals of the UEFA Champions League when they face Liverpool at Anfield on Wednesday.

The Spanish giants defeat the Reds when they faced each other at the Alfredo Di Stefano Stadium with Vinicius Junior grabbing the headlines on the night with a brace and a superb performance.

Despite holding an advantage, Madrid are far from finishing the job and would need to be at their very best if they are to do the double over Liverpool.

Jurgen Klopp’s side over the weekend came from a goal down to beat Aston Villa in the Premier League while Madrid secured all three points against Barcelona at home.

Nat Philips and Ozan Kabak will maintain their spot at centre-back on Wednesday with Joe Gomez, Virgil van Dijk and Joel Matip all suffering from long-term injuries. Jordan Henderson is also a long way off full recovery while Curtis Jones has a muscle issue.

For Zinedine Zidane, Dani Carvajal and Eden Hazard both miss the squad list to Liverpool despite being involved in squad training this week. Lucas Vazquez also added to the injury list after picking up a knee injury in the El Clasico last weekend. Sergio Ramos and Raphael Varane are also absent.

Goals are expected at Anfield on Wednesday but the likelihood of a win for either side is doubtful hence a 2-2 scoreline fair for everyone.