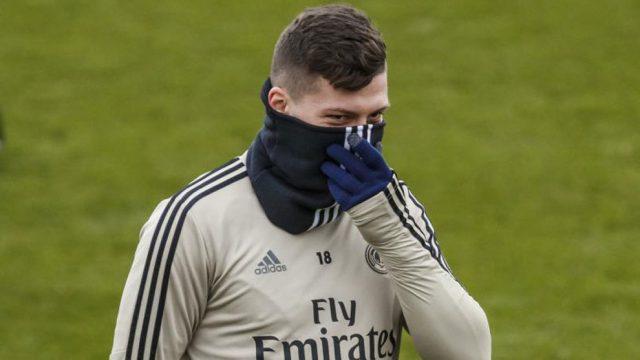 Per latest reports from Spanish media El Chiringuito, Luka Jovic has tested negative for the coronavirus, but is said to be self-isolating at home after coming in contact with a friend who tested positive for the virus recently.

It is a matter of when until Jovic stops making the headlines for the wrong reasons. His decision to travel to Serbia to celebrate his girlfriend’s birthday at a night club during the lock-down period also dominated the news.

Little over just a month later, he was unable to rejoin the Real Madrid team for training when they were called back into action due to injuring himself while at home.

In his first season with Los Blancos, the 22-year-old has not enjoyed a fruitful campaign, with controversy surrounding his time there.

He has just two goals to his name in as many matches, though most have seen him come from the bench. But the goal tally leaves him just a shadow of himself compared to his time with Eintracht Frankfurt last season.

There has been no mention of the number of days Jovic will be in isolation at home, but he is likely go miss out on the clash with Alaves on Friday.

Much respect to Alaves, but this could have been a game where the Serbia international would be handed minutes to boost his confidence, considering they have lost six of their last seven games since the restart of La Liga.