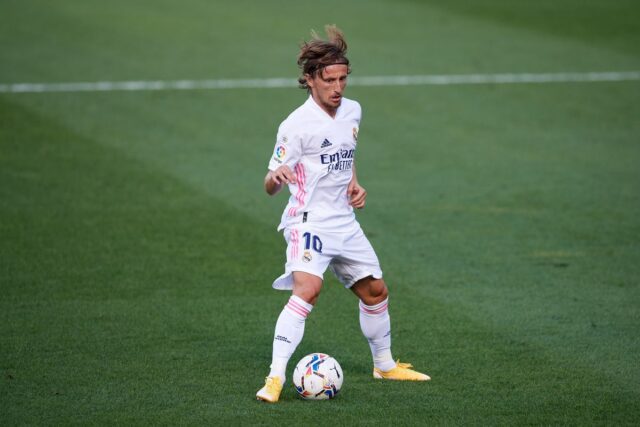 Real Madrid may have ended the campaign without any trophy under their belt, but some players were instrumental to the good season the club have during the 2020/21 season. One of such players is Luka Modric, who even at age 35 continues to work his socks out to ensure the smooth transition from defence to attack.

The Croatia international featured in 48 matches for Madrid during the just-ended season, 35 league games, all 12 games in the UEFA Champions League as well as the Spanish Super Cup game against Athletic Bilbao.

In the Spanish top-flight, Modric was 36 times named in the match-day squad but failed to make an appearance in just one of those and was also absent in two of the league games due to injury. The adorable midfielder started 32 of the 35 games he played while coming from the bench on three occasions.

It was also in the 2020/21 league season that the midfielder recorded his highest goal tally since moving to the Spanish capital. In his first season at Santiago Bernabeu in the 2012/13 campaign, Modric netted three goals.

His goal scoring record in the La Liga stands at:

However, in the 2020/21 season, the 35-year-old found the back of the net on five occasions in the league, scoring against Barcelona, Eibar, Elche, Granada and Villarreal. He also contributed to three assists as Zinedine Zidane’s team finished second, just two points behind eventual winners Atletico Madrid.

Modric also played all 12 games in the European competition for Madrid last season being a starter in 10 of those games. His only goal in the competition came on the opening match-day against Shakhtar Donetsk, a game Madrid lost at home by three goals to two.

After the extension of his contract until the summer of 2022, new manager Carlo Ancelotti will be counting on the experience of the midfielder who has proven that age is still just a number while on the field.