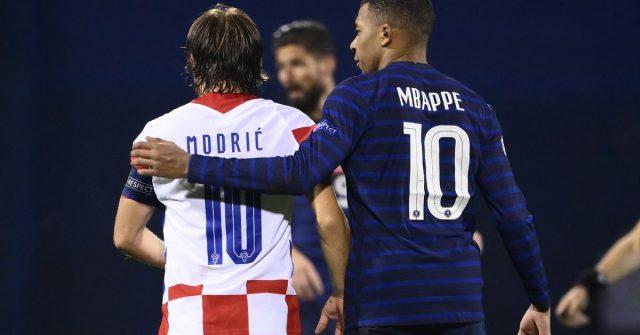 Wednesday saw the last round of international matches played across the European continent and other part of the world with club activities set to resume over the weekend.

On the path of Real Madrid, the likes of Luka Modric, Raphael Varane and Ferland Mendy were all in action as Croatia hosted France at the Maksimir Stadium last night.

Modric played the full 90 minutes available as captain of Croatia as they suffered a 1-2 loss to the current World Champions at home in their fourth group game of the UEFA Nations League.

The midfielder completed 90 passes with an accuracy of 93.8% while he also completed three of his four attempted dribbles against Les Bleus.

However, his performance was not enough to secure a point for Zlatko Dalic’s side as they succumbed to a defeat, leaving them third in their group behind Portugal and France.

Mendy also started in an unfamiliar right-back position for Didier Deschamps men on Wednesday night with Varane keeping his place next to his club team-mate.

The full-back was involved in France’s opener as his cross resulted in Antoine Griezmann breaking the deadlock after just eight minutes into the game. Mendy was also solid defensively for during the entire game.

Elsewhere, Martin Odegaard played 78 minutes of action before giving up his place Martin Linnes as Norway beat Northern Ireland by a goal to nil.

Luka Jovic was once again left on the bench throughout the game as Serbia played out a 2-2 draw with Turkey at the Ali Sami Yen Stadium.