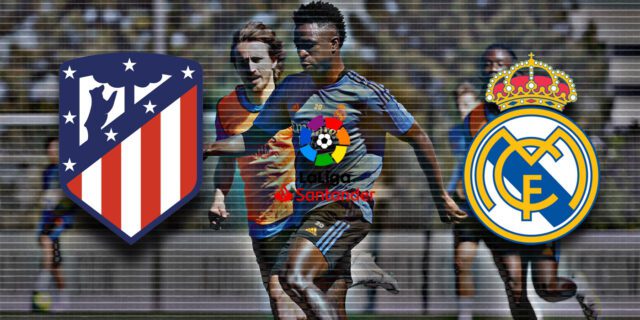 Over the years, the Madrid derby has always been delightful to watch as this showpiece has been one of the most-watched fixture in La Liga. Real Madrid and Atletico Madrid are two Spanish giants with so much history both in the league and in Europe. Fans are keen and certainly anticipating this big clash.

Although Madrid have been declared champions in La Liga after beating RCD Espanyol 4-0 last weekend, their City rivals are in contention to secure the 2nd position on the league log when the season ends in order to participate in next season’s Spanish Super Copa Competition.

Currently, Atletico Madrid are placed 4th on the league table being eight points behind second-placed Barcelona with a game in hand and three points behind 3rd placed Sevilla.

With one eye set on the finals of the UEFA Champions League in Paris later this month, the Los Blancos will be resting some players prior to the finals especially after producing a magical comeback against Manchester City on 6-5 aggregate last Wednesday at the Bernabeu.

Real Madrid haven’t lost in their last 8 games in all competitions against Atletico Madrid, winning 4 and drawing 4 times but Atletico looks the better side to get something out of these days as Madrid is likely to rest some key players.

Atleti have lost 9 matches in the campaign as compared to Madrid’s three in the competition.

Joao Felix and Thomas Lemar are not yet fit to be included in this fixture but Jose Maria Gimenez is back from injury and got some minutes last weekend.  All other players are fit to participate in this encounter.

For the visitors, Eden Hazard will continue to be out of action after undergoing surgery last month. For David Alaba, it is not expected for Ancelotti to rush him back onto the pitch as he wasn’t involved in the Champions League match against Manchester City.

Gareth Bale’s inclusion in the squad remains uncertain after suffering back pain last weekend before Espanyol’s match. Eder Militao will be a doubt and his availability will depend on a pass from the medics.

Real Madrid currently have no player suspended for this fixture.

Oblak hasn’t been impressive this season. Oblak has saved 61, or 57%, of the shots he has faced this season, which is an alarming drop from his career average of 76.5%(via theanaylst.com) in Atleti colours but you can’t deny the fact that he’s key to his side in big game matches. He’s one of the best shot-stoppers over the years. In La Liga, he has kept 10 clean sheets.

For Thibaut Courtois, he has been excellent all season both in the league and in European Competition. He produced 8 wonderful saves against Manchester City. He has managed 14 clean sheets in La Liga this season, placing him second and behind Alex Remiro who has kept 18 clean sheets.