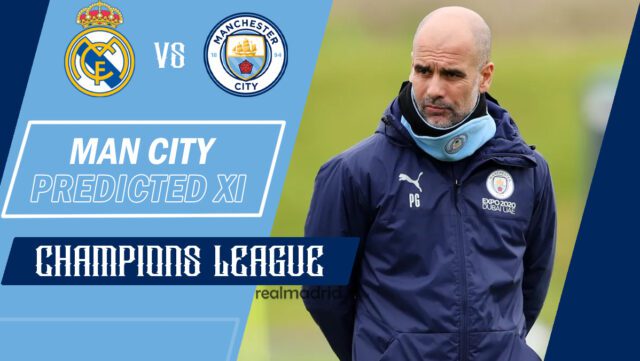 After the first leg of the UEFA Champions League semi-final clash between Real Madrid and Man City, there have been much euphoria around the second leg.

The first leg ended in a 4-3 win to the host team Manchester City, making qualification to the finals still open for both teams at this stage.

For Real Madrid, is now or never for them to overturn the tie. They have sailed through situations like this in the Champions League but the threat Manchester City poses is a worry for the Los Blancos.

Looking at the first leg, the Sky Blues created a lot of chances and converted a few of those chances whilst the Real Madrid were on target with the little chances they created.

Madrid are in contention for clinching their 14th UEFA Champions League trophy after winning their 35th League title last weekend. In the English Premier League, the title race is still open to either Liverpool or Manchester City despite the Sky Blues leading the table with a one-point difference.

Manchester City are the only third team to win three consecutive UEFA Champions League matches against Real Madrid after Juventus and Bayern Munich.

In this article, our main focus would be on how Pep Guardiola’s Man City can lineup against Real Madrid in UCL semi-final 2nd leg clash:

Pep Guardiola will go into this game with his normal attacking 4-3-3 system but there will be some little changes in the line up used during the first leg. Let’s take a look at how the Sky Blues can line up:

Ederson will be in the post for the second leg. He has managed 10 games for Manchester City in the Champions League and have kept 4 clean sheets in the competition so far.

Pep Guardiola confirmed that Kyle Walker will travel to Madrid and will be given every opportunity to prove his fitness ahead of Wednesday’s game, while Pep is though still without John Stones. Due to this, it is very likely that Nathan Ake will be kept at the right-back spot after producing an excellent performance against Leeds United over the weekend. He scored a goal on the day. Cancelo will be back in action after missing out on the first leg due to suspension. Laporte and Diaz will complete the centre half options in the backline.

In midfield, Pep could elect to bring Bernardo Silva back into the starting XI who started on the bench against Leeds, with Kevin De Bruyne and Rodri joining the Portuguese.

Bernardo is a midfielder who likes to go forward with his runs into the opposition’s box. He would be vital for City considering the vertical ability he brings on. De Bruyne who opened up the scoring sheet at the Etihad in the reverse fixture has two goals scored in the competition and will be tasked to play a more advanced role.

Gabriel Jesus’ hot form in recent weeks means there is no chance for Guardiola to drop him out of the starting lineup. He scored four against Watford in the league last week. He then followed that up with a start at centre-forward against Real Madrid, whom he scored against, then got another nod at No. 9 against Leeds on Saturday, whom he also scored against.

Jesus alongside Foden and Mahrez should complete the front three in the tunnel tomorrow.