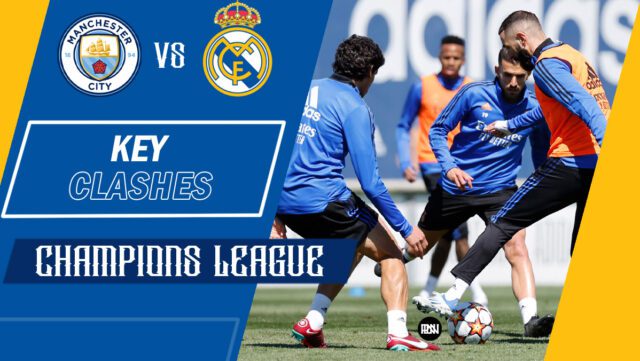 After a less busy weekend, Real Madrid will get their season back underway when they travel to the Etihad to face Manchester City in the first leg of their UEFA Champions League semi-final tie.

The pair will rekindle their rival on Tuesday, April 26, after two seasons ago when the Manchester-based club knocked Madrid out of the competition in the quarter-final.

Despite Real Madrid’s rich vein of form in the competition, they are aware they cannot allow the English side to impose their dominance on them they come up against each other.

In this piece, we take a look at some of the key battles on the field which could go a long way to deciding the fate of the encounter in England.

Both goalkeepers have been instrumental for their sides in the competition in the 10 games they have been in the post. With four clean sheets apiece, Ederson and Thibaut Courtois will obviously be key to the chances of their respective clubs.

Though Courtois has managed more saves than his opposition, the Brazilian has not been far off and with a defensive headache settling in the team, Ederson could be tested more often on Tuesday.

Karim Benzema has scored the most goals for Madrid in the competition, netting a whopping 12 times in the Champions League. The Frenchman could be adding to his tally when they come up against City. Benzema was also on the scoresheet the last time these two teams met.

For Mahrez, he hopes to get back to the scoring sheet after coming off the bench in the game against Watford over the weekend. The Algerian is City’s top scorer in the Champions League with six goals. Mahrez averages a goal every 135 minutes in the competition.

In the battle of the youngsters, it will be the turn of Phil Foden to have the influence Vinicius Junior has had in the competition this season. Vini Jr. has six assists already in 10 games, pegged with Leroy Sane and Manchester United’s Bruno Fernandes.

Foden on the other hand has four-goal involvements in nine games and would look to get the better of the Madrid defence in England.