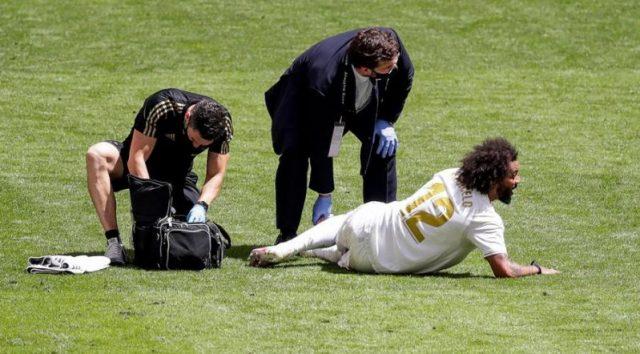 Real Madrid defender Marcelo will likely be sidelined for the rest of the La Liga season after the club confirmed on Friday he has an abductor injury.

The defender was ruled out of the game against Deportivo Alaves on Friday night, having been diagnosed with a muscle injury. The 32-year-old lasted the entire duration of Madrid’s 1-0 win over Athletic Bilbao on Sunday, but was confirmed with the injury after having scans on Friday.

Zinedine Zidane’s side are uncertain how long the Brazil international will stay out of action, as they edge closer to their third La Liga title in nine years.

“Following the tests carried out today on Marcelo by the Real Madrid Medical Services, he has been diagnosed with an injury to his left adductor muscle,” a statement on the club’s website read. “His recovery will continue to be assessed.”

His injury setbacks have seen him been limited to just 15 league appearances in the current campaign, with Ferland Mendy slotting in at left-back for majority part of the season.

The latest injury suffered will likely see Marcelo miss out on games against Granada, Villarreal and Leganes.

Marcelo could however be fit in time to face Manchester City in Los Blancos Champions League last-16 tie at the Etihad Stadium next month.