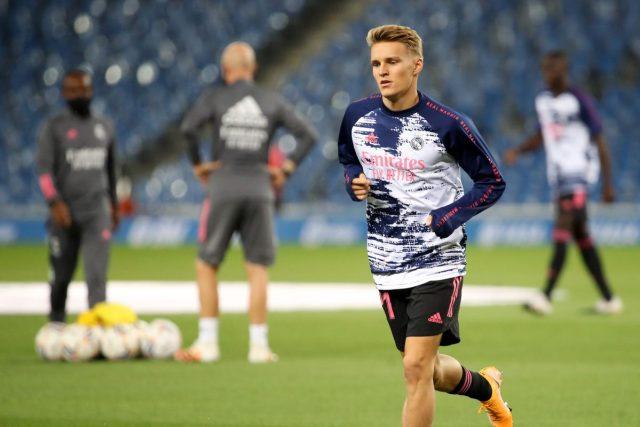 Having been sent out on loan on a number of times, Martin Odegaard has finally managed to convince the Real Madrid hierarchy that he deserves to be given a chance at the club.

The attacking midfielder was handed the opportunity to start on Saturday in Madrid’s La Liga opener against Real Sociedad, another of the clubs he enjoyed a short spell with.

Well for once, the question of where he was going to fit in was asked considering the club’s long standing tradition of playing a flat midfield three which consisted of Luka Modric, Casemiro and Toni Kroos.

However, he starting meant that Zinedine Zidane was opting for natural attacking midfielder in a formation that looked more like a 4-2-3-1 with Karim Benzema leading the line.

The Norway international showed glimpses of his quality but the opponent was too much a good side for him to really have an impressive outing for the club after a long while.

The 21-year-old was given a 6.9 rating by Sofascore but his 69 minutes on the pitch deserved more than that though the team were unable to put a goal into the opposition’s net.

His display may have not grab the headlines but if there is anything which came up for this discussion, it was how his return will likely change the team’s dimension in the 2020/21 campaign and going forward.

The No.10 role have had many players being used mostly from the bench but Odegaard looks certain to make a case for that position and Zidane will be the man to make that decision.

The creativity and vision of the youngster makes his claim a legit one and to think he would have to replace one of Modric or Kroos  in the starting line up may be the worry.

However, if he is to take up that role and give the team a new direction, the club would definitely have to be prepared to have wingers who are ready and willing to score as much goals for the club as they are bound to receive the services of the Norwegian.