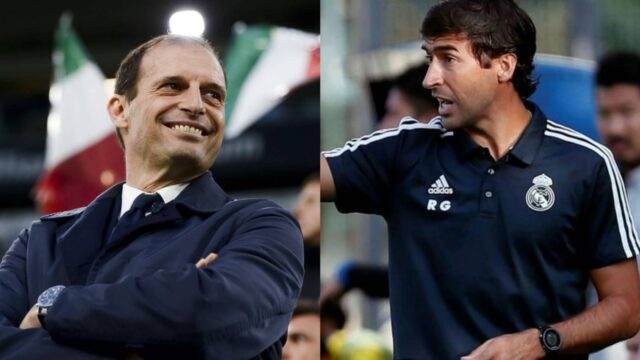 Former Juventus manager Massimiliano Allegri and current Real Madrid Castilla coach Raul Gonzalez have had their names mentioned as part of the contenders to take over the Real Madrid managerial job should Zinedine Zidane decide to leave at the end of the season.

The news of the Frenchman’s exit has gathered momentum over the past few days with the Spanish media outlet reporting that he has already informed his players about the decision to resign.

Zidane returned to the club in March 2019 for his second spell after the club sacked Santiago Solari. He led the club to the La Liga title during the 2019/20 season and looks to be in the run for the league title once again this season.

However, the former Madrid midfielder is tipped to step down once again due to reasons he feels are personal and the club are already looking at possible targets to replace him.

Among the available targets are Allegri and Raul, the latter currently coaching the club’s Castilla side.

Allegri turned down the Los Blancos managerial job three years ago after reportedly receiving a call from Florentino Perez when Zidane resigned after his first spell, but the manager already had a contract with Juventus.

However, he is now not tied to any club and Madrid are once again looking at the possibility of bringing in the Italian to be in the dugouts for next season.

Raul is also another of the names being considered following his impressive entry into the managerial fold after leading the junior side to win the UEFA Youth League last season while also guiding the Castilla side to the play-offs of the Segunda B division.