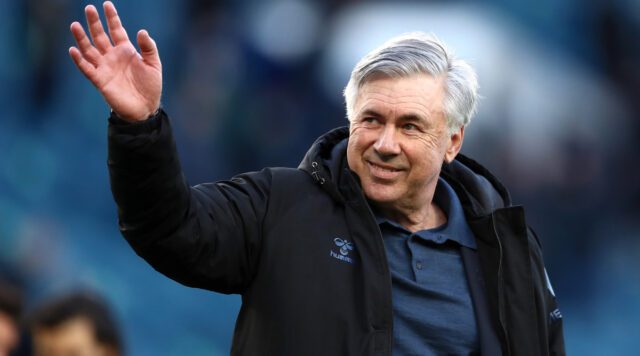 Real Madrid have officially confirmed the appointment of Carlo Ancelotti as the club’s new manager ahead of the 2021/22 campaign.

The Italian joins Madrid for a second spell in the dugouts, putting pen to paper on a three-year deal at the Santiago Bernabeu.

In a statement published on the club’s official website to confirm the appointment, Madrid writes: “Real Madrid C.F announces that Carlo Ancelotti will be the club’s first-team coach for the next three seasons.

“The ceremonial signing of the contract will take place tomorrow with the club president Florentino Perez at Real Madrid City, after which Ancelotti will address the media from 6pm (CET) in an online press conference.”

Ancelotti’s coup is a big statement from Los Blancos after the club saw Zinedine Zidane step down as the boss at the end of the 2020/21 season in which the club was unable to win any trophy.

There are also reports that the new boss will be earning less than the salary he was being paid at Premier League side, Everton. The 61-year-old negotiated with the Merseyside club to terminate his contract following the call from Madrid.

I would like to thank Everton FC, my players and the supporters for giving me the opportunity to manage this fantastic and historical club. I decided to leave as I have a new challenge with a team that was always in my heart, Real Madrid. pic.twitter.com/SDV8T7qMDR

Announcing his departure from the English club, Ancelotti posted on his social media: “I would like to thank Everton FC, my players and the supporters for giving me the opportunity to manage this fantastic and historical club.”

“I decided to leave as I have a new challenge with a team that was always in my heart, Real Madrid.”

“I leave here taking with me all the amazing moments we have experienced together and wish the Club and fans all the best,” he concluded.

The former PSG manager returns to the club looking to ignite yet another fight for European and domestic glory.