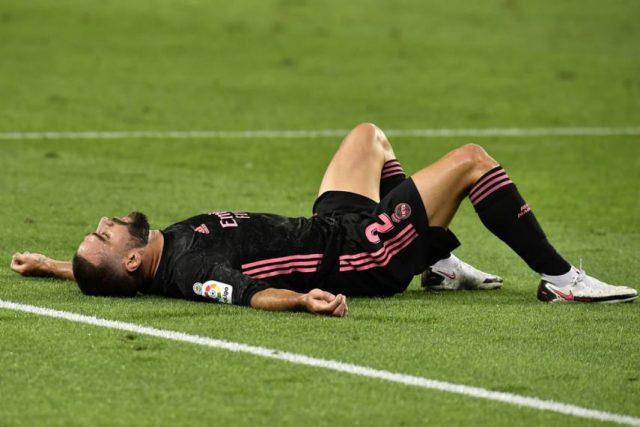 Real Madrid defender Dani Carvajal is the latest player to be added to the treatment table after he was confirmed to have suffered an injury earlier on Friday.

The Spain international had played a part in all three of the club’s La Liga games this season, with the last one being an appearance off the bench.

Carvajal is understood to have picked up a MCL injury during a training session on Friday, and the news comes as a big blow to Zinedine Zidane’s team, who have already lost Toni Kroos and Eden Hazard to respective injuries.

The statement released by Madrid on their official website read: “Following tests carried out on Dani Carvajal by the Real Madrid Medical Services, he has been diagnosed with an injury to his medial collateral ligament in his right knee. His recovery will continue to be assessed.”

The club also failed to reveal how long the right-back will have to be on the sidelines, but a report from COPE’s Arancha Rodriguez suggests that the Spaniard will most likely be out for around two months. And that would mean he is likely to miss some crucial fixtures along the first half of the 2020/21 campaign.

His absence will also be a chance for Alvaro Odriozola to try and get minutes and convince the manager he deserves to challenge his countryman for a starting spot in the team.