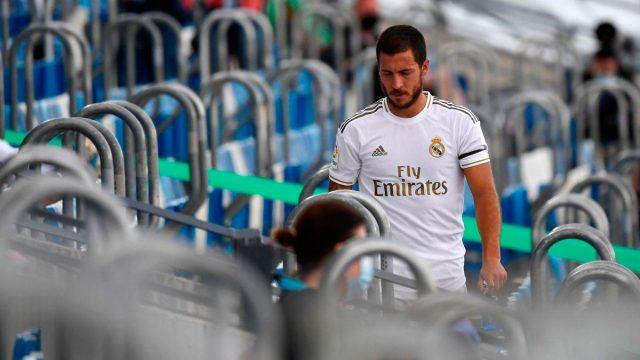 Real Madrid are set to lose Eden Hazard for another month after the player suffered what is confirmed to be a muscle injury.

The Belgium international was in line to make his first appearance of the 2020/21 La Liga campaign against Real Valladolid but was ruled at the eleventh hour much to his dismay.

The player is yet to feature in any of Madrid’s games this season as he continues his recovery from a long-standing ankle injury which he suffered during the 2019/20 season.

And he would now have to face around three to four weeks on the sideline again after the latest setback, this time to his muscle.

A report on the club’s official website read: “Following tests carried out today on our player, Eden Hazard, by Real Madrid Medical Services, he has been diagnosed with a muscle injury in his right leg. His recovery will continue to be assessed.”

OFFICIAL: Real Madrid have confirmed that Eden Hazard is out with a muscular injury on his right leg.

He has already spent 213 days of his Madrid career out injured, since joining the Spanish club last summer. pic.twitter.com/4EOLCb4m3v

Hazard would be gutted to be in the treatment room once again but he will be hoping to become available when football resumes from international break and he will also miss Madrid’s next league game against Levante on Sunday.

Concerns of the 29-year-old’s fitness is really alarming for both the club and the manager considering that the Belgium international was not known as injury prone during his time at former club Chelsea.