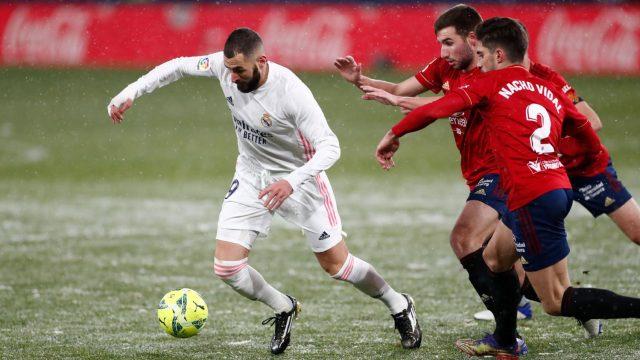 Real Madrid’s failure against the smaller clubs struck once again on Saturday night when they visited Pamplona to Osasuna in matchday fixture of the Spanish La Liga.

Madrid were looking to put behind their pre-match struggles to amass all three points over the weekend, which would have seen them move to the top of the table.

However, Jagoba Arrasate’s men were fully prepared for the threats of the Los Blancos, ensuring that they earned at least an important point from the game.

Zinedine Zidane made one change to the side that beat Celta Vigo in their first game of the new year, with Eden Hazard coming in to replace Lucas Vazquez in the front three as the latter moved into the right-back position as a cover for Dani Carvajal, who was suspended.

Madrid managed just one shot on target from nine goal attempts through out the game but could not find the back of the net against Osasuna despite boasting over 70% of the ball possession.

Surprisingly, the away side didn’t create any big chance in the game as compared to the home side’s one created and they had a goal disallowed twice in the second half for offside calls.

Zidane’s introduction of Mariano Diaz, Isco and Federico Valverde didn’t very little to the scoreline as they game ended without both sides putting a ball into the net.

Though Madrid’s unbeaten streak continues, it will still highlight their struggles against the weaker sides in the league having suffered same fate earlier in the season.

Madrid now turn their attentions to the Spanish Super Cup which begins next week, with Zidane’s men taking on Athletic Bilbao in the semi-final.