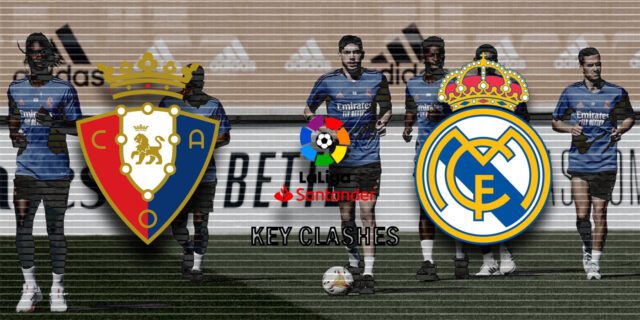 Real Madrid will face Osasuna at the Estadio El Sadar in Pamplona on matchday 33 of the 2021/22 La Liga season as the former closes in on a 35th league title.

Madrid are currently seven points away from being crowned the champions of this season’s domestic league but that journey will first need to begin against Osasuna.

Currently occupying the ninth position on the league table, Osasuna are on a two-game winning streak while Madrid have won all three league games since the defeat to archrivals Barcelona.

In this article, we take a look at some of the key clashes that could decide the fate of the game whether being all three points for Madrid or Osasuna recording their first win over Madrid in 11 or possibly a fourth draw in their last 10 games.

Both central defenders have been great for their respective teams in the campaign under review.

Garcia has contributed to 12 clean sheets for his side but has had to suffer seven yellow cards to his name as well in 30 games played. The Spaniard has been one of the best performers for Osasuna and his presence at the back has been a force to reckon with especially in the last league game against Valencia, where his side managed a 2-1 win away from home.

For someone playing his first season in Spain, David Alaba has obviously been a great signing for Carlo Ancelotti’s side, especially when they needed a replacement for Sergio Ramos. The Austria international has done everything good at the club including being directly involved in four goals in 29 games. Alaba has also picked up just two yellow cards in the 29 games, keeping 11 clean sheets.

Vinicius Junior is playing his most productive season at Real Madrid this season. With 14 goals and seven assists, the winger has obviously punched above his weight and Los Blancos will be hoping it is just the start of something great. Vini averages a goal every 177 minutes taking 2.4 shots per game. He has also created nine big chances this season.

Nacho Vidal obviously has a bit of work to do if he is to keep the pacy Brazilian quite on an away ground where he has flourished for the most part of the season. Nacho has started 29 games for Osasuna this season with just an assist to his name.

The two forwards definitely need no introduction but it is the form of the France international that the home fans will be more worried about considering his scoring frequency. With a goal every 92 minutes, Karim Benzema obviously poses much threat to the opposition’s goal area and his 25 goals so far is another concern. While he is not scoring, Benzema is also a providing, assisting 11 times.

Not to burden Budimir a lot, the Croatian international’s goal involvement the whole season is less than Benzema’s assists alone but as we have seen along the line this season, that does not necessarily tell the story. However, the Osasuna forward line has a lot of work to do.