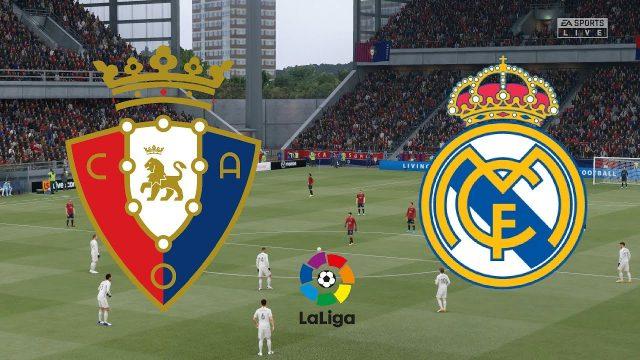 Real Madrid will seek to continue their unbeaten run in their last eight games across all competitions when they take on Osasuna in the La Liga on Saturday night.

Madrid have dropped just two points in their last seven games in the league and find themselves just two points behind league leaders Atletico Madrid, who have played two games less than Zinedine Zidane’s men.

Osasuna on the other hand have taken just one win from their last four games despite being unbeaten during that period – a 3-0 win over UE Olot in the Copa del Rey in midweek.

Zidane has won three of his four matches as Madrid manager against Jagoba Arrasate, with the other being a draw during the 2013/14 campaign.

The Los Blancos are on a five-game winning streak against Osasuna in the league and a win on Saturday will only extend their superiority over Arrasate’s team.

Rodrygo Goes is the only player unavailable for Madrid at the moment through injury while Sergio Ramos is expected to be back in the starting XI after missing out on the game against Celta Vigo. Dani Carvajal is also out due to yellow card accumulation.

For Osasuna, Chimy Avila, Darko Brasanac and Lucas Torro are unlikely to feature as a result of their respective injuries while Oier and Ruben Martinez are also likely to come back from suspension to feature against Madrid.

Raphael Varane ruled out of the Chelsea encounter