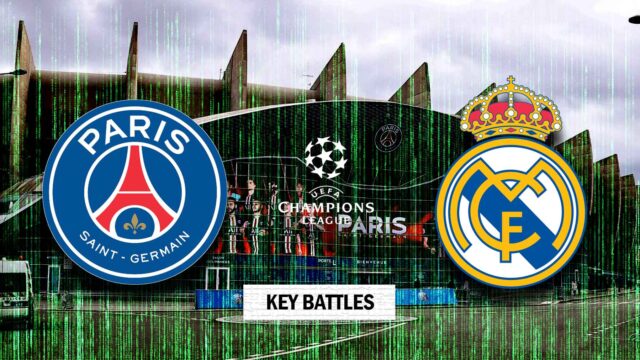 13-time winners of the UEFA Champions League, Real Madrid will take on Paris Saint-German in the round of 16 of this season’s competition on Tuesday, February 15.

For PSG, they are still in the quest to clinch their first UCL trophy and this fixture would be another tough huddle to cross.

Real Madrid have seen it all in the competition making them one of the favourites to win the trophy.

This fixture promises to be a very tricky and entertaining one as both teams would be parading top players and superstars in world football.

The euphoria around the game has already started rising and football fanatics around the globe are anticipating for the game to commence.

Here, we take a look at some key clashes that might have influence and possibly help determine the team that stands a chance of winning the match.

Lionel Messi despite not being much influential in domestic league competitions has been very good in the European Competition this season. The 34-year old Argentine has scored five goals averaging 1 goal per game in the five matches he has played. A player of his calibre possesses a lot of abilities to harm his opponents in big games like this and can turn things around for his team in difficult times in games. Lionel Messi has faced Real Madrid two times in the Champions League and has managed two goals.

He’s certainly a difficult player for his opponents to handle and would be key for PSG to win this match.

Post Ronaldo era at Madrid, Karim Benzema has been one of the outstanding players who have taken the mantle to pull the strings for the Los Blancos in terms of goals contributions. In this year’s competition, the Frenchman has featured in five games, scoring 5 and also averaging 1 goal per game. He will be a huge boost to his side in this tricky fixture. Benzema is amongst the top five scorers in the competition’s history.

This battle will be very interesting as both players possess similar traits.

Kylian Mbappe has been linked with a move to Real Madrid next summer and he is poised to make a statement when he faces what could likely be his future team. The young pacy forward has scored four times in six games, providing four assists. He could cause a lot of havoc on the flanks on the day. He’s very lethal on the left flank and in front of goal. He’s currently PSG’s leading top scorer in all competition.

Vinicius Junior has improved a lot this season under Carlo Ancelotti and has been instrumental and in good shape to cause problems for PSG. He’s ready to set up once again and make the difference in the match.

The question is, who would have a good game amongst these two young sensational forwards?

We would be witnessing a tough midfield battle between these two great midfielders. In games like this, you need your midfielders to be on top-level to conjure magic deep from the midfield to create goal-scoring opportunities for the team.

Both players have always paid their dues when defending their teams’ shirts on the field of play.

They are very good on set-pieces, passing the ball very well and keeping possession even under immersed pressure. One thing we cannot take away from these two midfielders is pulling off the string deep from midfield for the team.

Kroos, in recent years, has added goals to his play and has recorded two goals in five matches, completing 370 passes out of 398(92.2% passing accuracy) whilst Marco Verratti has recorded 92.67%  passing accuracy with 210 pass completion out of 229 without a goal contribution in the Champions League this season.