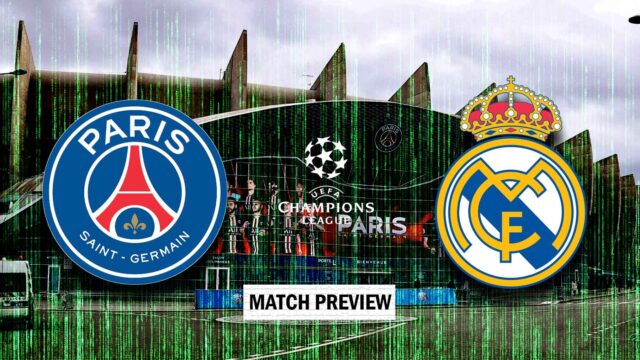 What a way to mark the return to UEFA Champions League action? What a fixture to commence the knockout stages of this season’s continental club competition… It’s Paris Saint-German against Real Madrid on Tuesday, February 15.

Call it the Kylian Mbappe show or the Vinicius Junior display but this game has more to it than just the two players mentioned above.

The Ligue 1 side are still chasing the first Champions League title in their history while Madrid are hoping to add to their incredible 13 UCL trophies won.

Real Madrid’s last triumph in the competition was during the 2017/18 season, where they beat Liverpool in the final in Kiev to add to their silverware collection.

The closest PSG have been to winning the trophy recently was in 2020, when they were beaten by Bayern Munich in the final, with Kingsley Coman scoring the only goal of the game.

The pair last met two seasons ago in the group stage where Madrid failed to win any of the two games, as PSG won 3-0 in the first encounter at home before settling for a 2-2 draw in the reverse fixture.

As interesting as this game will be, a lot of tension is expected to come out of it considering the intense discussion on Mbappe prior to the draw.

The forward has been heavily linked with the Los Blancos ad there are growing concerns he could be on his way to the Spanish capital at the end of the season for free with his contract expiring in the summer.

The kick-off for the game is scheduled for 20:00 GMT at the Parc des Princes.

ARE PSG REALLY STRONGER WITH MESSI?

Just like Madrid’s squad in the early 2000s, PSG have one of the star-studded sides in Europe following Lionel Messi’s arrival last summer.

His addition meant Mauricio Pochettino have at his disposal, Neymar, Mbappe, Di Maria, Mauro Icardi and the Argentina skipper.

However, they have been far from what they looked to be adding prior to Messi’s arrival. For a team that has invested so much, PSG’s recent performances are not a reflection of what their fans were expecting.

If there is anything positive about the Argentine, it is the fact that he has been key to the French side’s progress in the Champions League, scoring five goals in five games en route to his side making the next round.

Having scored so many goals against Madrid in the past, PSG will definitely be counting on Messi to come to the party when they host the Los Blancos on Tuesday.

But can he do it all by himself against Carlo Ancelotti’s side?

IS THE MIDDLE FOUR THE SOLUTION FOR MADRID?

Ancelotti is reportedly considering starting Federico Valverde on the right-wing, which could see either Marco Asensio or Rodrygo Goes miss out on a place in the starting XI.

Valverde looked one of the brightest spots in the Los Blancos last game against Paris. The midfielder’s work rate gives more room for the defenders to feel less pressure while it also gives Luka Modric and Toni Kroos the license to roam freely on the pitch without having to deal with too many defensive duties.

A midfield quartet of Valverde, Modric, Casemiro and Kroos may be an ideal solution to Madrid dominating the field areas considering the ground they have covered in the past.

However, never rule out Valverde also threatening from the right-wing and giving either Nuno Mendes or Juan Bernat the tough game they never expect.

Ancelotti confirmed that everyone is back in contention for the game against PSG, though the gaffer has to manage Karim Benzema’s game time with the France international not at 100% in terms of fitness level.

For PSG, Neymar is back with the squad but Ander Herrera, Alexandre Letellier and Sergio Ramos are all on the treatment table and will miss Tuesday’s clash.