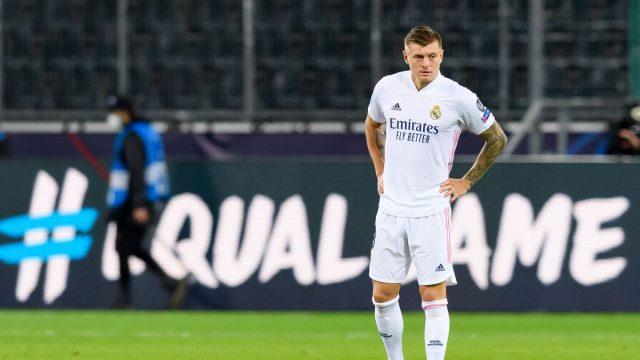 It may have not been the beat of nights for Real Madrid in Germany, but it was worth the drama the game served.

The Spanish giants Real Madrid fought until the very end of the game to secure a 2-2 draw after going down by two goals to nil before the 60th minute mark.

Marcus Thuram’s double was cancelled out by Karim Benzema (87) and Casemiro (90+3) to ensure that we had am interesting finish to the second group game in the Champions League.

Courtois may have conceded twice on the night against Mönchengladbach, but he was the reason why Madrid stayed in the game on Tuesday night. The goalkeeper made a crucial save to deny Alessane Plea from making it 3-0 before the away side eventually levelled the score.

Vazquez was deployed in the right-back position yet again. And despite struggling in the first half, he contributed to his side late comeback in the second 45 minutes.

Varane’s form has been a bit of a worry for Madrid in the last few games. The Frenchman was once again question on a few occasions during the game against Mönchengladbach, but he played out well.

Ramos continues to make a claim why he deserves a contract extension. The captain was all over the pitch and ended the game with the assist which salvaged a point for Zinedine Zidane’s men

Mendy put a below par performance on Tuesday, perhaps one of his bad games so far. He was also at fault for Mönchengladbach’s second goal on the night after playing the goalscorer onside.

The Uruguay international is gradually growing into the team and his ability to surge forward and track back with ease helped the team at some point of the game.

Arguably the best Madrid player on the night, capping the day with a goal and an assist. Casemiro played his usual game for Los Blancos and made four interceptions in the game.

Started the game very well but after conceding two goals, Kroos was beginning to get frustrated prompting Zidane to take him of in the 70th minute.

He could have grabbed a goal on two during Tuesday’s game but he was led down by his poor finishing while another effort hit the post.

Benzema scored the second goal to level things for Madrid but the striker is far from bring clinical. His positioning was questionable and had little chances in front of goal.

Definitely not the best of nights the 20-year-old would have wished for. Vinicius final third ball delivery is a cause for concern and should be improved upon.

For someone who made his first outing of the season, the Belgium international looked very lively during his 20 minutes on the pitch.

Together with Hazard, Modric’s introduction was key to opening up the opposition’s defence on Tuesday.

Didn’t have much work to do after coming on to replace Asensio in the 84th minute.