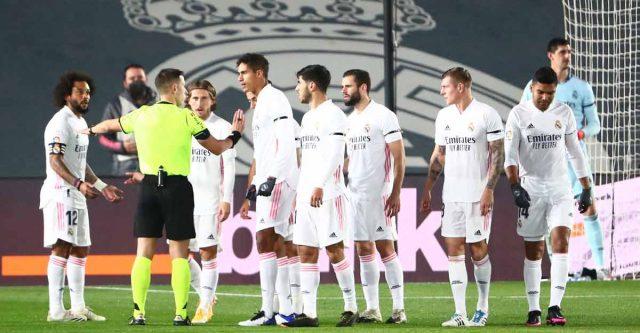 Real Madrid were handed yet another defeat at home by Deportivo Alaves on Saturday night after their strong performance in midweek against Inter Milan.

However, that was not the case in the weekend’s game as Alaves executed their plan to perfection to take all three points away.

Here is the player ratings from the encounter:

Made some crucial saves during the game but turned to kill the team’s spirit after gifting Joselu the ball for Alaves’ second goal.

Vasquez recorded the highest pass accuracy on the night and was always present in attack and defence for Madrid.

The Frenchman was caught out of position several times but did enjoy a good game in the latter stages of the clash.

He was the culprit for the penalty against Madrid. He only got worse from there and can also take a blame for the second goal.

Marcelo seem to be playing his last last days for the club. He’s been involved in every defeat the Los Blancos has suffered this campaign. Had to go off after 69 minutes of action.

Considering he is 35 years old, it is a performance to be happy about. Gave his all until the very last whistle.

He pulled one goal back for Zinedine Zidane’s men but his goal was a little to late to secure at least a point.

Lacked the energy to chase Alavés’ midfielders and could have played a part in drawing Madrid level before the halftime whistle.

Not sure what his best position is but Asensio is failing to live up to expectations after yet another poor performance at the office.

Mariano had a good chance to change the game but he saw his effort cleared off the line. There was nothing more he could have done.

Unfortunate to have suffered yet another injury early in the game. He was proving to be a headache for the opposition’s defence and was denied what looked like a clear penalty.

Replaced Hazard in the first half of the game and could have had more impacts if he got onto the ball regularly.

Grabbed an assist after replacing Asensio but could not change the game as he would have liked.

The Spain international could have been the hero on the night but his last ditch effort could only hit the crossbar.

Whipped in some good crosses into the opposition half after coming on for Kroos but he almost cost the team a third goal with a wasted set-piece.

Did very little to change the outcome pf the game after replacing Marcelo.