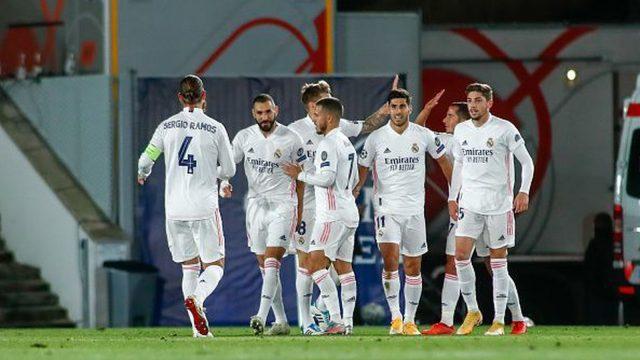 Real Madrid were far from their best in their third game in the 2020/21 UEFA Champions League against Inter Milan.

The Spanish giants may have won on the night but Inter were unfortunate to have suffered a last minute defeat with the game ending 3-2 in favor of Madrid.

Karim Benzema, Sergio Ramos and Rodrygo Goes were on the scoresheet for Zinedine Zidane’s team while Lautaro Martinez and Ivan Perisic scored both of Inter’s goals on Tuesday.

After starting the season with four clean sheets in his first five games, the goalkeeper has conceded at least one goal in his last five games. He made a great save in the opening minutes of the game to deny the Serie A from taking the lead.

The makeshift right-back continues to excel in his adopted role and was defensively solid against Antonio Conte’s men although he looked sloppy at times.

Varane’s performance has fallen below standards for sometime now and the player was once criticized for Inter’s face goal. However, he played a good game.

Is there anything the Madrid captain can’t do? Ramos scored his 100th goal in the famous white jersey on Tuesday and was defensively solid throughout the match.

Gave the ball away six times and was countless uncomfortable playing out from the back. He however managed five interceptions and completed three dribbles as his side won.

Valverde came close to opening the score for Madrid in the opening stages but fluffed his effort over the crossbar. He was caught in possession on several occasions as well.

Suffered a yellow card for what looked like an intelligent foul. The Brazil international showed his important to the team once again.

A great first half he had but his second 45 minutes performance was just not too good as he was replaced by Luka Modrić. He assisted Ramos for Madrid’s second goal from the corner.

The 24-year-old continues to struggle for his best form and had to come off after 60 minutes. He lost possession 10 times but managed one shot on target.

Today’s goal means that Benzema has now scored four goals in his last three games across all competitions for Madrid. But for the Inter keeper, he could have added another before the full-time whistle.

The Belgium international was beginning to get into the game before he got a kick into his ankle. He completed all three of his attempted dribbles in the game.

He grabbed an assist after coming off the bench to replace Eden Hazard.

The Brazilian also scored a clever goal yo win the game for the Los Blancos 16 minutes after his introduction.

Modrić didn’t have much to do during his 12 minuted cameo on the pitch, but he almost recorded an assist in the dying embers of the encounter.