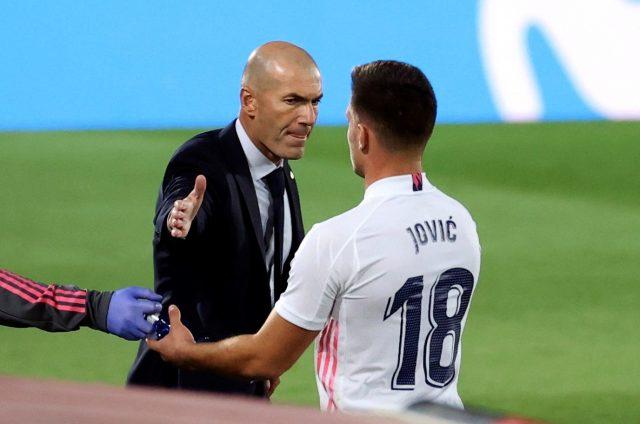 Real Madrid beat Real Valladolid in their third game of the season and their first at home by a goal to nil.

The home side needed an inspiration from the bench with Vinicius Jr. coming on to tap into the net the winner of the game

It was a game Madrid could have scored more, however the players could only manage just a goal with Roberto Jimenez in goal for Valladolid getting an impressive night despite conceding from close range.

Here is how we rate Zinedine Zidane’s side after yet another victory in their bid to defend the La Liga title.

Arguably the best performer of the night against the 18th placed side, Thibaut Courtois won another Man of the Match award on Wednesday night. The Madrid shot-stopper made five saves during the game with three in the box.

He saved Los Blancos on many occasions before and after they went ahead and deserves all the plaudit for the win over Valladolid.

The Spain international was the surprise inclusion in the starting line up after replacing Dani Carvajal. He covered the most run on the pitch in the first half but was never productive enough going forward.

The France international had little to worry about during the game but showed up at crucial times to deny the opposition a chance. He recorded five clearances and three interceptions.

The Madrid captain was solid defensively and was unlucky to have been whistled against on several occasions in the opposition’s box. Ramos made seven clearances in the entire game, the most by a Madrid player.

Not the best of nights for the Brazilian but for someone who last played in quite a long time, he was impressive and provided options going forward.

The Uruguay international continues to show Zidane why he deserves a run in the starting lineup. He was impressive once again in his second consecutive start.

That would be the best possible rating for the defensive midfielder. He was left to do much of defensive works as a result of the full-backs going forward more often.

The 35-year-old showed class on the pitch, playing in a role suited to Toni Kroos. With a 92.4% pass accuracy, the Croatian is showing no signs of slowing down.

Coming in as a replacement for Martin Odegaard, Isco was little too convincing in the No.10 role and had to come out after 57 minutes.

Had the chance to grab a couple of goals today but the forward blew the first opportunity wide of the post, while his header from a corner was parried away by the Valladolid goalkeeper.

The Frenchman continues to struggle in front of goal but played a part in Madrid’s winner as he pressured the defender into making a mistake. Benzema managed just one shot on target.