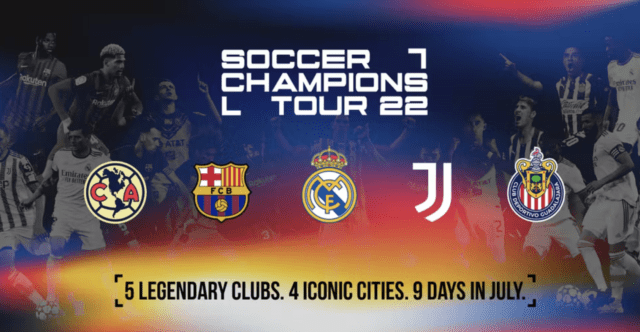 In July, the Soccer Champions Tour is bringing some of the top European clubs to the Western US and Texas. Real Madrid will be taking part and playing in three matches. This might be the best chance for American fans to see top-tier soccer being played in some of the country’s iconic stadiums.

This article will give a quick overview of the Soccer Champions Tour, then it will provide a preview of each of Real Madrid’s three upcoming matches.

What is the Soccer Champions Tour?

The United States has been slow to embrace soccer but it seems to finally have happened. MLS is growing in popularity and there are now 28 clubs across the United States and Canada. While salary caps prevent these teams from attracting the elite players that European clubs can afford, the quality of play on the field has been steadily improving as homegrown talent has realized they can stay in the country and have a successful career.

The Soccer Champions Tour is a new event that is bringing elite soccer to American audiences. Many Americans cite the low scores of matches as a reason to dislike soccer. Seeing top teams like Real Madrid, Barcelona and Juventus playing will easily show those doubters that low scoring does not equate to a boring game.

The tour is comprised of five exhibition matches, played in Las Vegas, Dallas, Los Angeles and San Francisco. The teams participating are Real Madrid, FC Barcelona, Juventus, Club América and Chivas de Guadalajara. If the event is a success, it will hopefully be expanded in future years.

Real Madrid’s first game will be against Barcelona at the Allegiant Stadium in Las Vegas. It will take place on Saturday, July 23, and is one of the most anticipated matches of the tour. The rivalry between the two teams is one of the fiercest and longest standing in football. When they meet every year in El Clásico, it is one of the most watched sports events of the year. That energy and intensity should produce an exciting match in Las Vegas.

Hopefully, the Las Vegas Lights FC will take their guests on a tour of Sin City. Considering how big a reputation Las Vegas has around in the world, a visit to the casino that started it all should be at the top of their list. The Golden Nugget Casino was the first casino to open on the Vegas strip. Real Madrid’s visit should probably be after the match, so there’s no temptation to take advantage of the Golden Nugget’s online version.

On July 26, Real Madrid will head to San Francisco to play Club América. They will be playing at Oracle Park, the home stadium of the San Francisco Giants. The stadium has previously hosted several other soccer matches, most recently the 2013 International Champions Cup match between Everton and Juventus.

Club América is one of the oldest and most popular soccer clubs in the Americas. They are from Mexico City and were founding members of the Primera División. They have won the most titles of any team in Mexico and finished the 2021-22 season in fourth place in the standings.

The match between these two teams should be interesting. They have faced each other occasionally but not since 2016. Club América are likely to feel like they have more riding on this game, so it should be an enjoyable match.

The final match of the tour will take place on July 30 at the Rose Bowl. This is one of the country’s iconic football stadiums, so it is a perfect venue for an international soccer match. Real Madrid will be playing Juventus.

Real Madrid and Juventus have a long history of playing against each other in the UEFA Champions League. They’ve played each other 21 times, with nine wins to Juventus, 10 wins to Real Madrid, and two draws. While the Soccer Champions Tour obviously won’t count towards anything, they are likely to take this opportunity to see how each other’s team is shaping up for the coming season.

Los Angeles has always been a big sports town and it has now become one of only two cities in the United States to have two local MLS teams – LA Galaxy and Los Angeles FC. This should mean that there’s going to be a great crowd for this match. These fans should also know enough about European soccer culture to keep things entertaining – hopefully they’ll have learned the words to ¡Hala Madrid! y nada más and Storia di un grande amore!