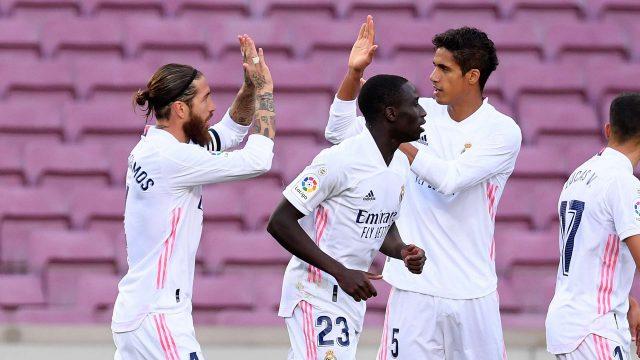 Ahead of their important UEFA Champions League tie against Inter Milan on Tuesday, Raphael Varane spoke to the press on Monday.

The game is one of the most important ones coming up for Zinedine Zidane’s side ahead of the international break next week.

Both sides are in search of their first win of the competition having failed to win either of their first two games in the group. Madrid have taken just one point so far while Inter have two point from a possible six.

The defender admitted the game against the Serie A side is expected to be very difficult but he added that his side are motivated to put in a great performance on the night.

He said during the press conference: “This is a difficult match and we’re playing a strong opponent. We have to win and we’re motivated. We have to give our all. We like the matches with pressure. This is a different situation to what we’re used to. We have to view this like a direct elimination match. We have the squad to take on any challenge.”

Sergio Ramos has proved to be an important figure at the back for the Spanish champions and the club have lost their last seven games in Europe without the Spain international.

Varane was asked about the impact of the Madrid captain to the team and he replied: “As a defender I always feel more comfortable when we defend with less space and when we’re more compact. When we don’t defend as well, I have to make more complicated decisions at the back. It’s true that the last few results without Sergio in the Champions League haven’t been good. I think the character he has is very good for the team. But, it’s a matter for everyone. My qualities complement Sergio’s very well. I think I make him better and he makes me better.”

On his errors against Manchester City last season where Ramos was missing, the Frenchman added: “That’s in the past and you have to learn from what happens in the past to get better. We can’t look back when we win and that’s also true when things go badly.”

Varane also spoke about Eder Militao’s absence due to testing positive for coronavirus, which has left the club short of options at the defensive department.

He added: “We’ve been preparing well for the matches every three days and we don’t think about injuries. It’s true that many players have had injuries across Europe because of the rhythm of the matches, but it is what it is. We can’t think about rest or injuries. We have to think about winning.”

Sergio Ramos out for weeks with knee injury