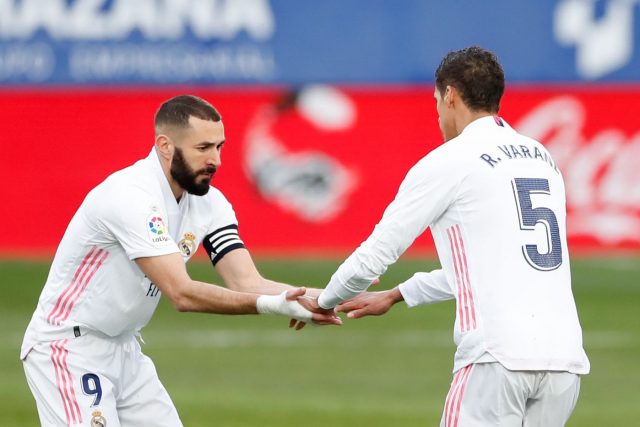 Real Madrid defender Raphael Varane has praised teammate Karim Benzema, commending the player for his hard work as well as his progress in the last few years.

The Frenchman spoke with Europe 1 in an interview where he discussed the player’s recent goalscoring run coupled with the club’s chances of lifting the UEFA Champions League once again.

“Benzema is a hard worker and he keeps progressing. He’s very good physically and he’s playing his best football. He’s an extremely efficient and elegant player on the field, it’s a pleasure to watch him play,” said Varane.

He also talked about rumours linking Madrid manager Zinedine Zidane to the role of France coach.

“It’s a possibility. The French national team is a target for every French coach, it’s normal that he’s potentially considered but it’s not something relevant now. Our coach [Deschamps] is doing a very good job and we must focus on our short-term goals: clinching our presence in the World Cup and then the 2021 Euro,” he explained.

Madrid were handed a difficult draw in the quarter-finals stage of the Champions League as they drew Liverpool – a match which is a repeat of the competition’s 2017/18 season final. The central defender insisted no match will be easy heading forward.

“Ever since we advanced past the Round of 16 we know that we will be facing the best teams in Europe. In 2018 we faced the champions of each country from the Round of 16 to the Final, it’s never easy,” the 27-year-old added.

The Frenchman was also asked about the chance of playing alongside Kylian Mbappe at the Santiago Bernabeu, and he said: “He’s still young but he has made huge progress and he keeps developing. He’s becoming an all-around player and he’s still a scorer, he’s one of the best. My goal is to play alongside the best players and Kylian is one of the best players in European football.”