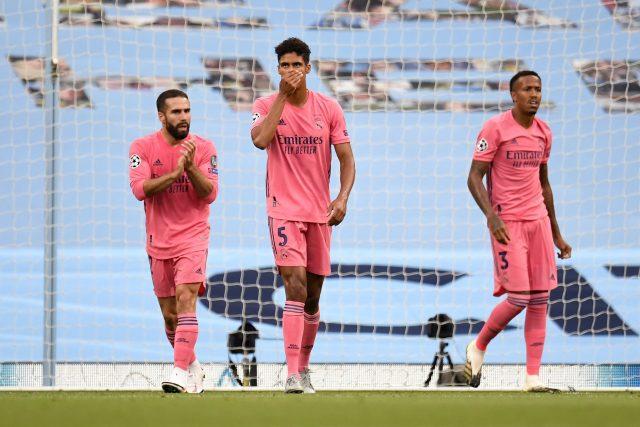 The France international committed two horrendous blunders which Manchester City capitalised on to end the Merengue’s run in the competition.

Zinedine Zidane who had won his previous three shots at the competition suffered a first Champions League exit as manager of Real Madrid after an aggregate score of 4-2.

Madrid had a chance to get back into the tie after Karim Benzema cancelled out Raheem Sterling’s early strike before half time, but Gabriel Jesus put the tie to bed in the second 45 minutes of the game.

Both of the Citizens’ goals came as a results of a horror from the 26-year-old, who didn’t benefit much from the absence of Sergio Ramos, who was serving a suspension.

And the centre-back took upon himself the blame for the game’s outcome at the end of the 90 minutes.

“This defeat is mine, I have to accept it,” he told reporters after the game. “I am responsible for this defeat. We had prepared well but you pay for your mistakes. I am sad for my team-mates. At 1-1 we had the chance to qualify and today things did not go to plan.”

Zinedine Zidane also took attention off the blunders, deciding to focus on the positives from the 2019/20 season which saw Los Blancos win the La Liga title.

“We will tell Varane, keep your head up,” the manager told reporters after the final whistle at the Etihad. “I prefer to dwell on what most of my players achieved over the course of the season, which was spectacular.

“We lost the two games, and in the end they deserved it. In first 15 or 20 minutes there was a feeling we could not get past their press. But then we played pretty well. In the second half, when we were on top, we gave up the second goal.”