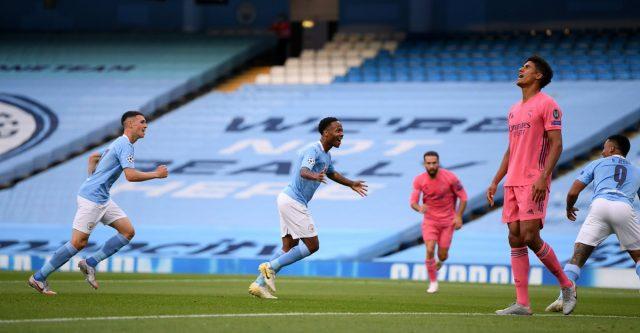 Real Madrid were knocked out of the UEFA Champions League on Friday night after suffering a 2-1 defeat at the hands of Manchester City.

Madrid headed into the game hoping to overturn the 2-1 score in the first-league at the Santiago Bernabeu, having already secured the Spanish La Liga title.

However, Los Blancos were unable to take anything positive from the game as a errors from Raphael Varane saw the away team succumb to defeat at the Etihad Stadium.

Raheem Sterling and Gabriel Jesus took advantage of the blunder from the France international as City won 4-2 on aggregate despite Karim Benzema’s strike before the half time break.

With five months separating both legs, Pep Guardiola’s side will now advance ahead to the next round over Zinedine Zidane’s side who bring their 2019/20 campaign to an end.

Madrid never looked threatening from the very first blast of the whistle as the Citizens outplayed the Spanish side in the opening 45 minutes of the game.

Having tried to play out from the back, Varane was caught in possession by Jesus following the former’s long wait on the ball, before the Brazil international squared the ball to Sterling – who made no mistake in slotting the ball into the net to open the scoring.

Madrid’s first threat came after the home side had scored with Ederson parrying away Benzema’s strike after a great movement to turn away from Aymeric Laporte.

A long spell on the ball heading into the final minutes of the first-half saw the Madrid forward head home a sweet cross from Rodrygo Goes to equalise for Zidane’s side.

However, Varane failed to put into safety a long ball forward from the City half, attempting a back pass to Thibaut Courtois which Jesus intercepted and nipped into the net to restore the Citizens’ lead.

Guardiola’s side will now face Olympique Lyon who progressed at the expense of Juventus despite losing 2-1 in Italy.

Real Madrid leave it late to secure a point in Germany

What is Rodrygo’s best position at Real Madrid?

Time for Real Madrid to play for Karim Benzema?

Real Madrid leave it late to secure a point in Germany