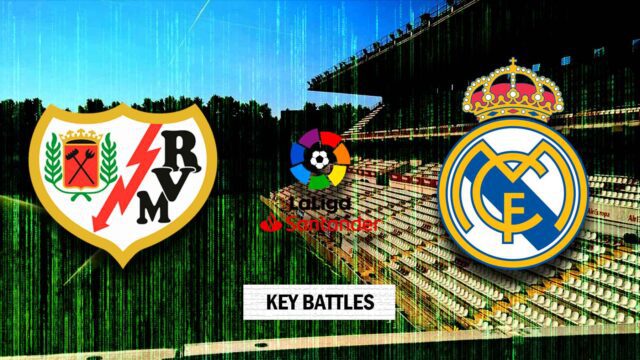 Real Madrid are currently on top of La Liga Santander and they find themselves six points ahead of second-placed team Sevilla after 25 rounds of matches.

Carlo Ancelotti’s side put up a spectacular performance last weekend when they came up against Alaves in an emphatic 3-0 win at home.

However, this week’s away fixture will be very tricky against Rayo Vallecano who are placed 11th on the league log.

Here, we would take a look at some interesting clashes that could possibly have an influence on the game.

A battle between two shot-stoppers who have been vital for their teams respectively.

Dimitrievski has been keen in Rayo’s set-up, becoming their dependable goalkeeper for the number one spot. He has kept 6 clean sheets out of the 20 matches he has been in post and he’s set to give Real Madrid a tough test on Saturday.

Courtois on the other hand has been more superb than Dimitrievski. The Belgian shot-stopper has been arguably one of Real Madrid’s best players this season. So far, he has conceded an average of 0.8 goals per game. Thibaut Courtois has registered 7 clean sheets so far in La Liga and he’s looking forward to continuing his fine form coming Saturday.

An interesting battle most football fanatics around the globe are anticipating for this clash between two proven goal scorers in world football. In recent times Radamel Falcao’s output hasn’t been the best as age hasn’t been on his side. The experienced striker has lacked consistency in terms of goal scoring in La Liga, scoring only 5 goals in the 16 matches he has played but on a good day, Falcao can cause a lot of problems to the defence of Real Madrid.

Benzema has been on top form since the start of the campaign and contributes to 27 goals Real Madrid have scored in La Liga. He has scored 18 times and assisted 9 times in the domestic league. He’s currently the leading candidate to clinch the Pichichi trophy at the end of the season with 18 games left for the conclusion of La Liga season. Benzema is in good shape to help Real Madrid edge past Rayo Vallecano.

Isi Palazon hasn’t been impressive in terms of goal scoring but his work rate cannot be questioned in Rayo’s set-up. The flamboyant midfielder works so hard with his dribbling abilities and the creation of chances for his club. The 27-year-old Spanish professional has scored two goals, providing one assist in La Liga. Though he is adapted to play on both flanks, he has mostly been used on the right side of the attack.

Vini Junior has been a different player under Carlo Ancelotti and has already provided 13 goals, five assists so far in La Liga. He’s expected to continue his fine form to help Real Madrid secure all three points. He’s ready to step up once again and make a difference in the match when called upon.

The match is expected to be played on Saturday, February 26 at exactly 5:30 pm.