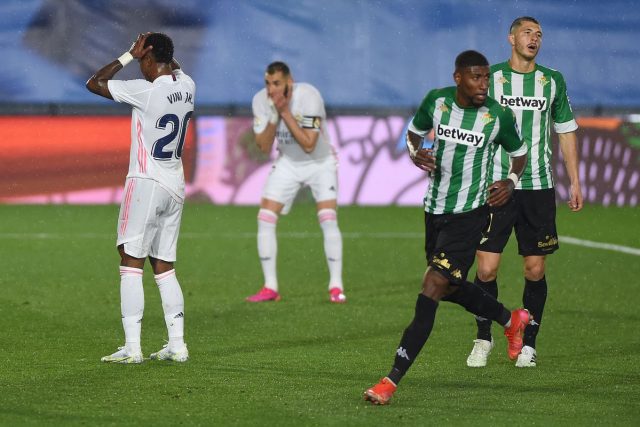 Real Madrid dropped points once again over the weekend in their league game against Real Betis at the Alfredo Di Stefano Stadium.

Both teams failed to find the back of the net after 90 minutes with Madrid the most affected from the draw as it could hamper their chances of reclaiming the league title.

Madrid went into the game knowing that a win could have sent them to the top of the league table on a head-to-head basis but the Los Blancos were far from their best.

Zinedine Zidane made changes to the side that recorded the emphatic 3-0 win over Cadiz in midweek with Dani Carvajal, Luka Modric, Isco and Marco Asensio all being handed starts against the Basque club.

However, the home side did very little to ensure they claimed the maximum points from Manuel Pellegrini’s men.

Madrid saw the majority of the possession in both halves of the game, but their only shot on target in the first half was saved by Claudio Bravo.

In the second half, Rodrygo Goes, who was starting his third consecutive game saw his shot come off the post as Madrid urged closer to finding the breakthrough.

Zidane’s side came into the second half shooting from all angles and despite their efforts, they were unable to see their toothless attack find its rhythm.

Bravo made five saves as he helped his side to walk away with a point from the Alfredo Di Stefano Stadium.

Despite the poor result, Madrid will still hope they have a chance to win the league once again though wins for Barcelona and Atletico Madrid could complicate things.

Madrid will now focus on the UEFA Champions League game against Premier League side Chelsea on Tuesday.