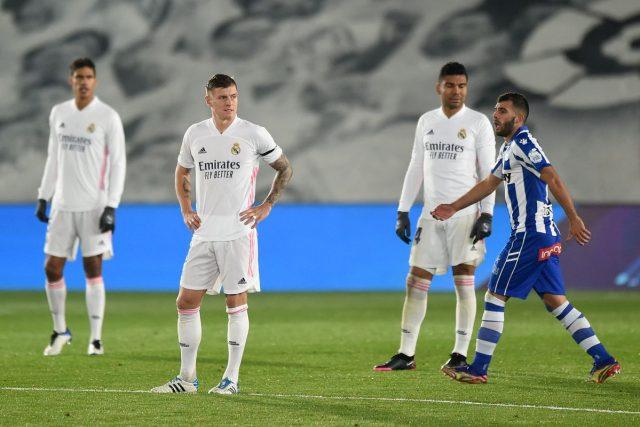 Deportivo Alaves claimed their third victory in the 2020/21 Spanish La Liga campaign with a win over Real Madrid at the Alfredo Di Stefano Stadium on Saturday night.

In a game in which Pablo Machin’s men regarded as the underdogs, they defied all odds to inflict yet another home defeat to Madrid.

A goal each from Lucas Perez and Joselu saw the away side take all three points despite the home team’s attempts to get back into the game.

Alaves took the lead as early as in the fifth minute after Perez converted from the penalty box following a spot-kick awarded against Nacho Fernandez.

Madrid went on to create further chances in the first 45 minutes but could only see their efforts saved by Fernando Pacheco in goal for Alaves.

Thibaut Courtois also denied Alaves the chance to double their lead just before the half-time break while Toni Kroos fluffed his finish after being handed a chance on goal.

After the recess, Alaves continued to press Madrid for a second and were rewarded though a Courtois error at the back, giving Joselu the chance to put the ball into an empty net.

Casemiro pulled one back for the Los Blancos in the 86th minute after a follow up from a corner kick fell to him but his goal was not enough to earn the home team a point at least.

Zinedine Zidane made three changes to the starting lineup that defeated Inter Milan in midweek with the likes of Marcelo, Casemiro and Marco Asensio all being handed a start in place of Ferland Mendy, Dani Carvajal and Martin Ødegaard.

Madrid will face Shakhtar Donetsk in their next game in the UEFA Champions League before returning to league action against Sevilla.