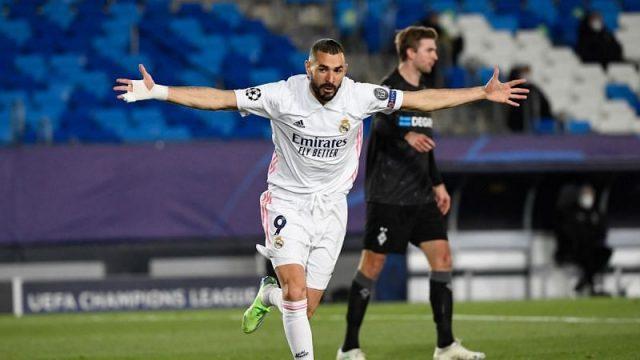 It was a much better performance from Real Madrid on Wednesday following their victory over Borussia Mönchengladbach at the Alfredo Di Stefano Stadium.

A first half double from Karim Benzema ensured that the home side went into the break on course to qualify into the next stage of the 2020/21 UEFA Champions League.

Prior to the game, Madrid were languishing in the third position though they were levelled on points with second-placed Shakhtar Donetsk after five games.

The Spanish side needed a win against the Bundesliga to secure their qualification into the next round and that was exactly what they did on Wednesday.

Madrid took an early lead in the ninth minute after Benzema headed Lucas Vazquez sumptuous crossing into the 18-yard box to put smiles on the faces of all Madridistas.

The home side continued to create chances and look for a second goal before the half-time whistle. And the reward once again with their attack on the right-flank but this time Rodrygo Goes assisting the Frenchman.

Zinedine Zidane’s team looked more hungry after returning from the break, firing at all angles of Yann Sommer’s goal. They forced the goalkeeper into some excellent saves while also hitting the crossbar and the goalpost respectively.

For Thibaut Courtois, it’s a very good game after keeping back to back clean sheets in his last two games after a long period without one.

Madrid will now head into the weekend knowing that the bragging rights will be up for grabs when they face Atlético Madrid.