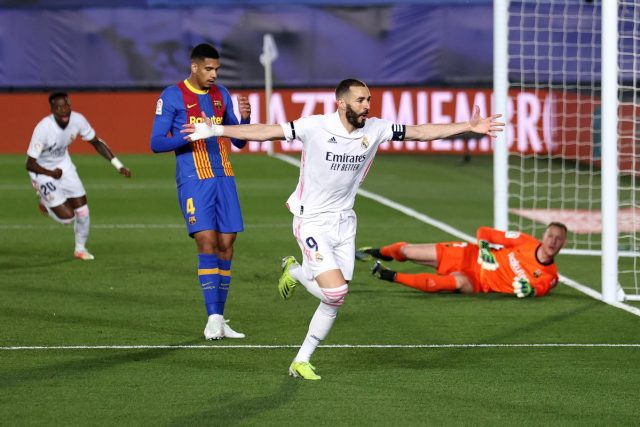 Zinedine Zidane and his side took a huge step in their quest to defend their league title on Saturday after beating rivals Barcelona with a 2-1 scoreline.

Karim Benzema and Toni Kroos were among the goal-scorers for Real Madrid at the Alfredo Di Stefano Stadium as Oscar Mingueza scored the away side’s only goal.

The Los Blancos went into the game with the tactics of sitting deep and hitting Barca on the counter-attack, which gave them so many opportunities with just two being converted.

Benzema gave the home side the lead after 13 minutes after a brilliant run from Federico Valverde, who then released the ball to Lucas Vazquez to assist the Frenchman. That was Benzema’s 19th goal of the 2020/21 league season.

Kroos doubled Madrid’s lead 15 minutes later from a direct free-kick after Vinicius Junior was fouled just outside the penalty box. With the Germany international continuing his fine form for the club.

But for the goalpost, Lionel Messi would have pulled one back for the Catalan club before the break from a direct corner kick.

Vazquez was forced to go off before the half-time whistle having collided with Sergio Busquets, which led to him picking up a knock.

After the recess, Barcelona changed from their 3-5-2 formation to a 4-3-3 shape, which gave them more options anytime they surged forward.

They looked like drawing level after Mingueza pulled one back for them after a cross from Jordi Alba, but that was all they could manage.

Madrid also had options to extend their lead but for indecisiveness and inaccuracy on their path, Zidane’s men could only end the game with two goals.

The results also mean that this is the first time Madrid have beaten Barcelona in both fixtures of the league since last doing so in 2007/08.

Madrid will now turn their attention to the UEFA Champions League second-leg game against Liverpool at Anfield on Wednesday.