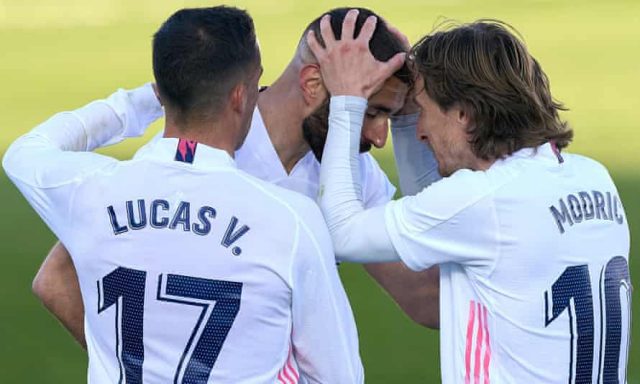 A Karim Benzema double in the second half saw Real Madrid come from a goal down to beat Elche at the Alfredo Di Stefano Stadium on Saturday.

Madrid went into the game with one eye on their UEFA Champions League game against Atalanta in midweek, hence Zinedine Zidane opting to make the rotation to his side.

The Frenchman settled for a 3-5-2 formation against the relegation battling team, with Isco, Sergio Ramos, Federico Valverde and Vinicius Junior all starting the game.

Elche contained the pressure of the home side despite falling behind in ball possession, keeping Real Madrid far away from their goal post.

The visitors grew into the game with time, and broke the deadlock on the hour mark – Dani Calvo scoring his second league goal of the 2020/21 campaign.

Ten minutes after coming on, Modric set up Karim Benzema for the equaliser after Kroos decided to go short with a Madrid corner.

The home side continent to press for the match-winner in the latter part of the game with Casemiro and Benzema missing sitters.

However, the Los Blancos’ efforts were rewarded in added time, Rodrygo combining well with the French forward to steal all three points for Madrid.

The goal was Benzema’s 15th league goal this campaign as Madrid went back into the second position.