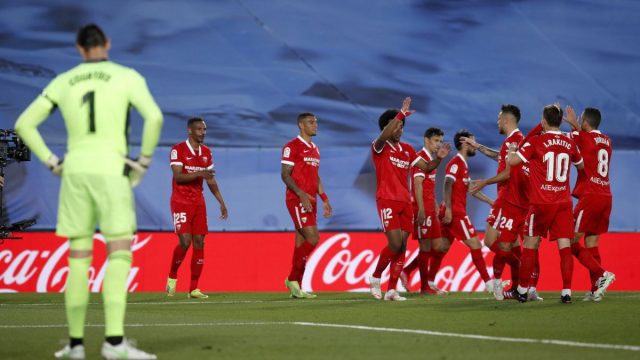 Real Madrid came from behind to earn a hard-fought 2-2 draw with Sevilla on match-day 35 of the 2020/21 Spanish La Liga season.

But for what looked more of an Eden Hazard goal than a Diego Carlos own goal, Madrid would not have earned any point at the Alfredo Di Stefano Stadium.

Madrid went into the game in the third position, knowing that they needed a win to topple Atletico Madrid and Barcelona, who played a 0-0 draw on Saturday, to go top of the league.

The Los Blancos were denied a controversial opener after Alvaro Odriozola was adjudged to be in an offside position before receiving the ball to assist Karim Benzema in the 12th minute.

10 minutes later, Sevilla took advantage of a set-piece in the final third of Madrid’s area with Ivan Rakitic finding Fernando with a cushioned header. The midfielder made no mistake and put his side in the lead.

Julen Lopetegui’s side went into the break with the advantage from Fernando’s goal but Madrid played for everything after recess.

Marco Asensio was introduced into the game together with Miguel Gutierrez, Zinedine Zidane taking off Luka Modric and Marcelo respectively.

Asensio’s first involvement in the game saw him draw his side level after scoring from close range after being found by Toni Kroos.

Real Madrid saw their penalty canceled after VAR decided that the ball had earlier struck Eder Militao’s hand prior to Madrid’s attack with Sevilla being awarded the penalty.

Rakitic made no mistake from the spot to restore the away side’s lead while dashing Madrid’s hopes of retaining the league title.

However, substitute Hazard deflected Kroos’ shot from outside the box into the net to make it 2-2 for Zidane’s men who will now hope to win their remaining games and ensure Atletico drop points in the last three games as well.