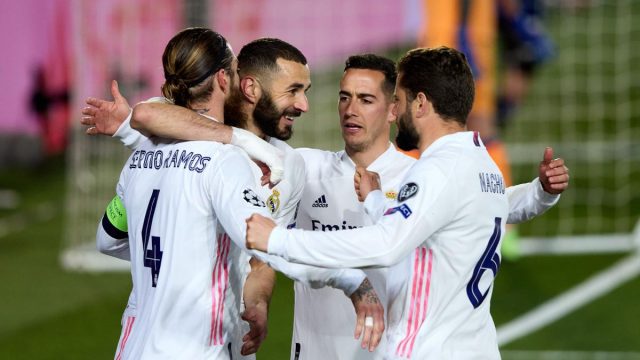 Real Madrid booked their place in the last eight of the 2020/21 UEFA Champions League season on Tuesday following their emphatic 3-1 win over Atalanta at Alfredo di Stefano Stadium.

Karim Benzema, Sergio Ramos and Marco Asensio all scored for the home side to make it a 4-1 aggregate scoreline in both legs.

Madrid won by a goal to nil in the first-leg which took place in Italy three weeks ago and had all to play for in the return league considering the quality in Atalanta’s setup.

However, the Los Blancos made light work of the Italian side – taking the lead after just 34 minutes played, when Luka Modric capitalised on a mistake at the back by Atalanta to set up Benzema.

A solo run from Vinicius Junior saw Madrid earn for themselves a penalty after Rafael Toloi brought down the Brazil international in the penalty box.

Ramos stepped up to take the spot-kick, slotting it past the Atalanta goalkeeper to double his team’s lead and record his 101st goal for the club.

Luis Muriel pulled one back for the away side from a well-struck free-kick but their consolation was short-lived as Asensio added a third, just a minute after Atalanta’s goal.

Modric ended the game as the ‘Man of the Match’ after yet an impressive performance in the middle of the park.