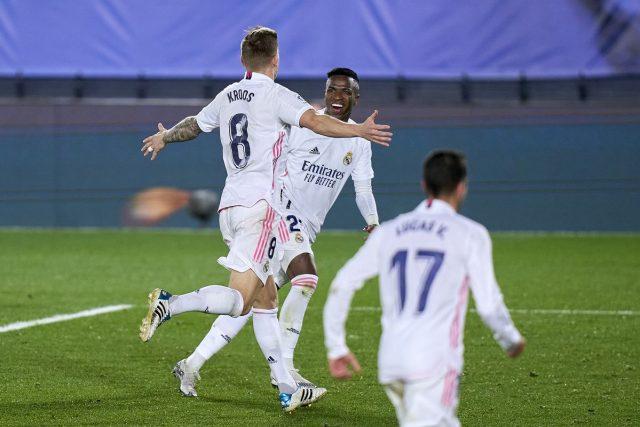 Real Madrid achieved their aim of three wins on the bounce when they hosted Athletic Bilbao at the Alfredo Di Stefano Stadium on Tuesday night.

Goals from Toni Kroos and Karim Bemzema ensured that the home side walked away with all three points while Ander Capa got a consolation goal for the visitors.

The game started with Athletic seeing much of the ball and threatening Madrid’s defence but tables turned after Raul Garcia was shown his marching orders following his second yellow card in just 13 minutes. Both cards came as a result of fouls on midfielder Kroos and referee Jesus Gil Manzano didn’t hesitate to send the player off.

Zinedine Zidane’s side then took charge of the game, creating chances almost everywhere as Vinicius Junior came close to opening the scoring but was denied by Unai Simon.

Having been denied the opener, the Brazil international them turned provider as he assisted Kroos to put the home side in a lead in added of the first half.

The Germany international’s strike was his goal in the league this campaign at the right time.

After the recess, the Basque club continued to work their way back into the game despite being a man down. Their efforts paid off in the 52nd minute when Capa broke into the Madrid defence and slotted the ball into the net after Thibaut Courtois had made a save from his initial strike.

Zidane then introduced Marco Asensio and Isco into the game, taking off Vinicius and Federico Valverde. Madrid pressed for the second goal with the new set up and found an opening when Benzema headed home Dani Carvajal’s cross to restore his side’s lead.

The win means that Madrid have now their last three league games in a row and four consecutive games across all competitions.

They currently occupy the third position and will face Eibar on Sunday in a bid to close the gap on Real Sociedad and Atlético Madrid.