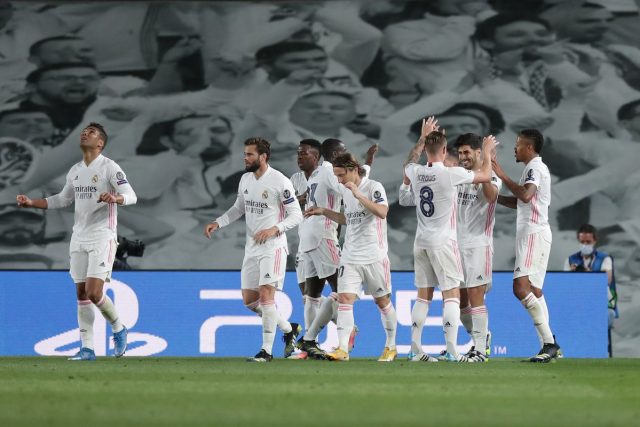 A collective performance every Real Madrid fan will be proud of ahead of the second-leg encounter at Anfield. Madrid beat Liverpool by three goals to one at the Alfredo di Stefano Stadium on Tuesday night.

A brilliant and inspiring display by Vinicius Junior saw the youngster net twice against the current Premier League champions while Marco Asensio was also on the score sheet.

Both Madrid and Liverpool went into the game without their first-choice centre-backs and were hoping their replacements would do a better job. However, it was Madrid that came out on top at the end of the game.

Vinicius proved to be too hot for Trent Alexander-Arnold to handle on the night, with Toni Kroos locating the Brazil international with a long pass to play him through on goal.

The 20-year-old’s first touch was good enough to put him on course to finish off neatly as Madrid took the lead after 27 minutes played.

Asensio doubled his side’s lead nine minutes later, after lobbing the ball over Alisson Becker before tapping it into the Liverpool goal.

Jurgen Klopp made a tactical substitution before the break, introducing Thiago Alcantra into the game in place of Naby Keita.

Liverpool started the second half strongly and had a goal as their reward when Mohammed Salah put the ball past Thibaut Courtois after excellent work from Diogo Jota.

Their hopes of getting back into the game were however dashed when Vinicius slotted home his second goal of the night from a Luca Modric pass.

The Liverpool defense was caught off guard following a throwing by Lucas Vazquez to Karim Benzema, who then passed it into the path of the Croatian to assist the youngster.

Madrid now holds the first-leg advantage and will be hoping to capitalise on that when they travel to England next week for the return leg.