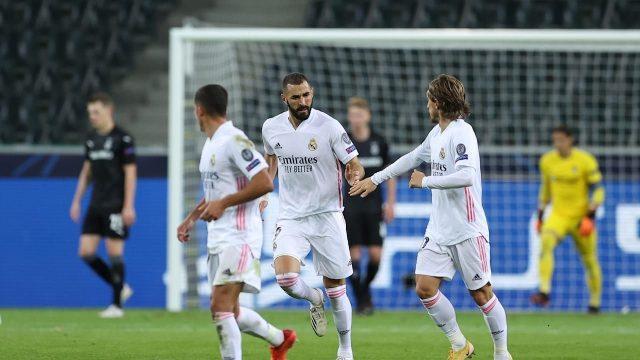 The match which took place at the Alfredo Di Stefano Stadium ending 3-2 saw Karim Benzema continue his fine form in front of goal as Sergio Ramos grabbed his 100th goal as a Real Madrid player.

Going into the game, the Spanish side had taken one point from their previous two games against Shakhtar Donetsk and Borussia Mönchengladbach respectively.

Having seen Mönchengladbach convincingly beat Shakhtar earlier in the day, Madrid needed a win to stay within just a point off the first placed team in Group B.

Benzema opened the scoring for Madrid after 25 minutes after being on the receiving end of a misplaced pass by former Madrid full-back Achraf Hakimi.

The Frenchman’s first touch took the ball away from the Inter goalkeeper leaving him with an empty net, which he payed into.

Shortly after the opener, Ramos doubled the home side’s lead from a set-piece with Toni Kroos grabbing the assist for the second goal. The goal meant that the Spain international has now scored 100 goals in a Madrid shirt, playing as a defender.

Antonio Conte’s side were far from finished in the first 45 minutes, however as Lautaro Martinez pulled one back for them before the half-time whistle.

The second half saw Inter continue their domination of Madrid and created a host of chances before finally drawing level through a goal from Ivan Perisic in the 68th minute.

Zidane once again needed inspiration from the bench with the introduction of Brazil duo Vinicius Junior and Rodrygo Goes for Eden Hazard and Marco Asensio respectively.

Luka Modric also came in for Toni Kroos after 78 minutes but it took a moment of magic from the Brazil internationals to win the game for the current La Liga champions to make it 3-2.

The Los Blancos will face the Nerazzurri once again after the international break and Zidane will hope they improve on their performance today before facing the Serie A side.