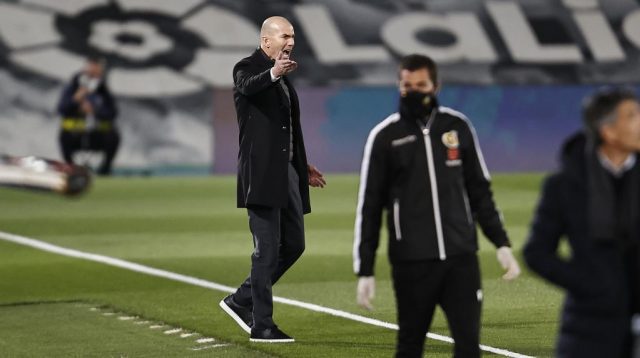 Real Madrid suffered a slight setback in their fight to retain their Spanish league title, following their 1-1 draw with Real Sociedad at the Alfredo di Stefano Stadium.

Manager Zinedine Zidane spoke to the media after the game in which his side failed to take advantage of the chances they created.

On his general view of the encounter, Zidane said: “We played well. We had chances in the first half and we couldn’t score. It’s two points dropped at home, but we couldn’t get them because our opponents were very good.”

“I wasn’t happy with the pressure. After 10-15 minutes, we changed [system] again. The changes went well in the match.”

Zidane further reiterated that his side are still focused on their season and will not lose their head over the draw on Monday.

“We’re going to remain calm because in the end this can happen. Sometimes you win when you don’t deserve to. Today we played well and it didn’t go for us. The team created chances but in the end it’s two points dropped at home. That’s football,” he continued.

“This hasn’t changed the way we’ll go about that game. We’re playing the team in first place and will aim to play well again. There’s still a long way to go”