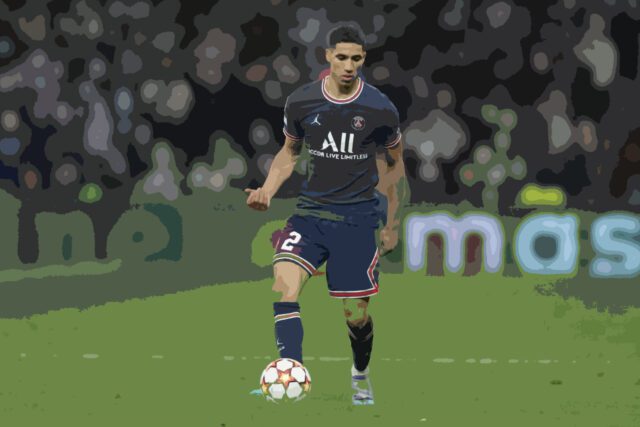 It’s only been just a season since Achraf Hakimi joined Paris Saint-German. But the defender is said to be unhappy about life in Paris, according to reports.

Having been a member of Real Madrid’s squad for some time, the Morocco international was sent on loan to Borussia Dortmund to continue his development after playing time became almost impossible under the tutelage of Zinedine Zidane, who preferred the experience of Dani Carvajal.

However, after the expiration of his loan deal, the right-back had a tough decision to make on whether to return to the Spanish capital where he was still regarded as not ready enough for a regular starting role.

As part of his development, Hakimi joined Inter Milan in the summer of 2020, helping them to win their first league title in many years before leaving for PSG.

In their quest to conquer Europe, the Ligue 1 side also managed the signings of Sergio Ramos, Lionel Messi, Gianluigi Donnarumma and Nuno Mendes. However, the club still failed in their project as they were knocked out by Real Madrid.

The performance of the team in Europe as well as other tensions in the dressing room is said to be part of the reason why Hakimi is already considering his future at the club.

Before moving to PSG, Madrid were said to have an interest in the return of the 23-year-old while former Inter boss, Antonio Conte revealed Hakimi has his heart set on a return to Madrid’.

With doubts already being around Carvajal, a pursuit for Hakimi will probably not be an overboard topic for the directors at the club.

At just 23, the Moroccan has a whole lot to give down on both sides of the defence and with the young team Madrid seeks to build, Hakimi’s return could be a step in the right direction.

Comparing both players in their domestic leagues, Hakimi has been directly involved in seven goals in 23 appearances while Carvajal has played a role in two goals in his 19 appearances.

Signing Hakimi now will be a good piece of business for the Los Blancos considering the solidity in the other positions in the backline.

Whatever the case be, trust Real Madrid to be linked with the fullback again in the summer.

Are Real Madrid giving themselves another Champions League shout?

Without Ferland Mendy and Casemiro against PSG, do Real Madrid stand a chance?