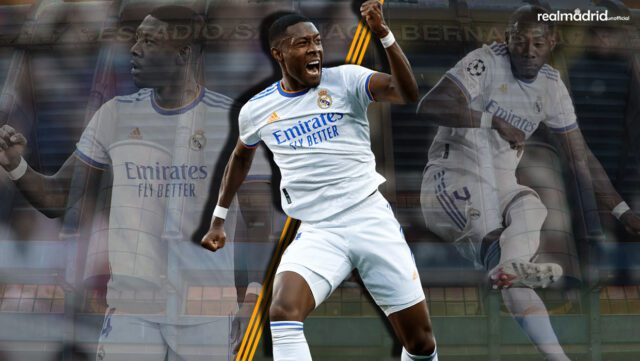 The 2020-21 season tested the Madridistas. We were heartbroken. Witnessing a season with an unprecedented number of 59 injuries in the 2020 season was hard on all. Piling on to the top of all this misery was the departure of two legends of the club at the end of the season: Zinedine Zidane and the Real Madrid captain whose blood was white, Sergio Ramos.

Replacements were found and were roped in. Carlo Ancelotti for Zidane and the Bayern defender, David Alaba for Ramos. And now we’ll talk of the godly defender and sing songs of praise for the beast in the defence and leadership. Alaba took up the No.4 jersey and rightly deserves so.

David Alaba arrived as a free agent and is the deal of the century so far for the Los Blancos. When it was thought and widely believed that filling Sergio Ramos’ shoes as a defender and a leader would be impossible for any player in the world, the Austrian took up the challenge, and though we are yet to finish the first season, we can confidently say that we have found our leader in the back, who gives his all for the team.

Alaba has been a natural in the backline. He had the experience of playing as a left-back and center-back. This single signing solved plenty of woes for Madrid. Whenever we’ve faced a crisis on the left of the defence, Alaba steps up to replace the first choice LB Ferland Mendy, and David Alaba’s place is filled by another loyalist, Nacho Fernandes.

The exemplary defending of the 29-year old David Alaba is a golden sight for the fans. Alaba’s age also puts him in the perfect category of experience and youth, with the player having at least four years in his star-studded footballing career.

David Alaba’s chemistry with other players

To become a great leader and a player, you need to know your teammates. And Alaba has done his work. He is seen at times working up the players to be more aggressive, which is the sight of a natural leader and reminds us of Sergio’s years at the team.

Alaba, while partnering with Eder Militao, has formed one of the best back pairings in the world of football. He helped Militao to reach a new level of personal best, which we saw on a few occasions in the last season. Now Militao’s consistency is one of their most desired attribute, which to some extent could also be credited to his partner in defence.

David Alaba is also seen joking on the field with the youngsters, often grabbing and poking the players on their necks. Often after the goals, he teases the young players, lighting up the tensions and intensity that come along with the matches.

The Austrian has been phenomenal. He has been a friend, a leader, and most importantly, a Madridista. How so? The chair celebration in the epic comeback against the PSG says so. A polite and straightforward message from Alaba, lifting the white chair after Benzema’s goal against PSG, on Instagram read: “Don’t you sit on our chair.” If Alaba is not the representation of a Madridista, then I’m afraid we all couldn’t be one either.